Generations of families have quietly passed down a mysterious religious practice in a mountainous area of western Japan where Buddhism was abolished long ago.

It is not known how or when the Buddhism-derived “Mikka Jizo” (Three days Jizo) practice started, nor exactly why and how it has survived over the years.

But if it had been uncovered in the Meiji Era (1868-1912), serious repercussions could have followed.

Throughout the year, two statues of Jizo, the guardian deity of children, are transferred from house to house every three days in Nara’s Nyucho district, about 20 kilometers east of the city’s downtown core. About 50 homes in Nyucho are involved in the Mikka Jizo practice, in which prayers are given for the healthy lives of the villagers’ children.

On March 20, the Jizo statues used in the practice were on their third day inside a “zushi” Buddhist altar at a home in Nyucho. The zushi, which stands about 40 centimeters high, sat in an alcove of the house, where offerings of fruit and water had been placed.

One small Jizo statue and a larger one enshrined in the back of the zushi could be seen through a slight gap between the altar’s doors. 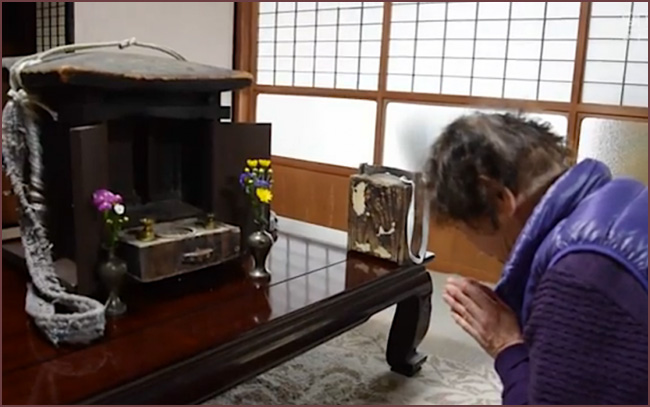 Kimiyo Minami, 60, who lives in the house, said she was born and raised in the district, so she has seen Mikka Jizo since childhood.

“I personally do not feel it is a rare sight,” Minami said.

During the Meiji Era, Nyu village, the predecessor of the Nyucho district, abolished Buddhism and converted to Shinto in the “Haibutsu Kishaku” movement triggered by the Meiji government's policy to adopt Shinto as the state religion.

Buddhist temples were demolished, and all Buddhist services were eliminated from the village. Even today, funeral ceremonies in Nyucho are, in principle, held in Shinto style.

Although practitioners of Mikka Jizo would face no persecution today, they still maintain a sense of mystery with the practice.

After the Jizo statues are enshrined at a home for three days and nights, they are carried to the next home at dusk.

Busy or rainy days can lead to postponements in the transfers. If household members in charge are too sick or too old to carry the zushi, they can wait until the weekend when a younger person can do the job.

No one--except the household that keeps the statues and the one that transferred them--knows where the statues are enshrined in the district at any given time.

Only once a year, the statues make a public appearance, inside the zushi wrapped in “hagi” Japanese clovers at a Bon festival.

On the evening of March 20, Minami used ropes to carry the zushi on her shoulders to a neighbor’s home. Her grandson brought with him a small wooden box containing tools for religious rituals.

“The guest has arrived,” Minami called out to the neighbor, using a respectful and friendly reference to the Jizo statues.

After receiving no reply, Minami opened the door to the house and left the zushi inside. She left the house after giving a bow.

Nakakubo moved the zushi to a “zashiki” tatami-matted room where she undid the ropes and put her hands together in prayer in front of the zushi.

“I was told to wish for a healthy baby to the statues when I married into the family,” Nakakubo said, recalling her marriage more than 60 years ago.

Nakakubo said she told her daughter-in-law, Kazuyo, who married Nakakubo’s oldest son, to follow in her footsteps.

“Tomorrow, my son will visit us with his wife whom he married in autumn last year, so she will offer a prayer to the statues for the first time,” Kazuyo said cheerfully.

It is unclear where the Jizo statues are currently enshrined.
- source : asahi.com -NORIHIDE FURUSAWA


Eighty-five-year-old Nyucho resident Sazako Nakakubo recalled the role Jizo had played in her marriage 60 years earlier. “I was told to wish for a healthy baby to the statues when I married into the family,” Sazako said, adding that she had subsequently instructed her daughter-in-law, Kazuyo, who married her eldest son, to continue the practice.
- source : buddhistdoor.net/news - 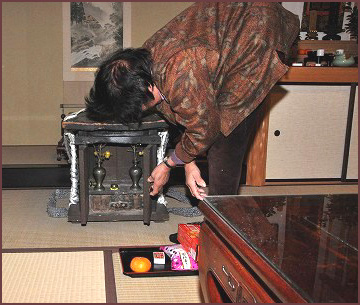 Jizo ready to leave this home. 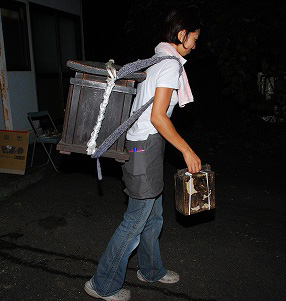 Jizo is carried to his new home. 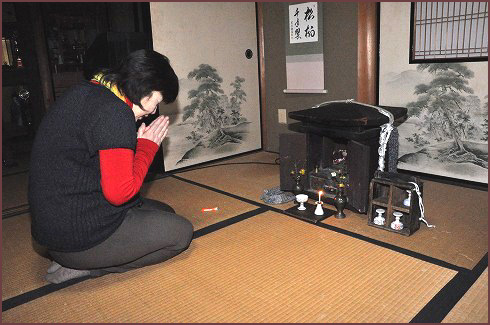 Jizo arrived at his new home for 3 days.