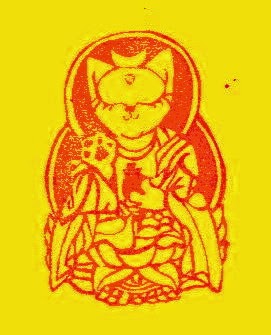 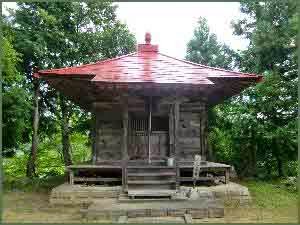 The local people call this hall 日面薬師堂 Hizura Yakushi Do, since it is located at the border between the hamlets of Kajiyaba and Hizura.
It is situated on a hill with stone steps leading up in the compound.
The hall has been founded in 1639.

On the way up to the hall there are many stone markers and statues.
One of them is the Cat Deity. 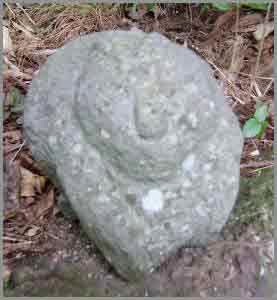 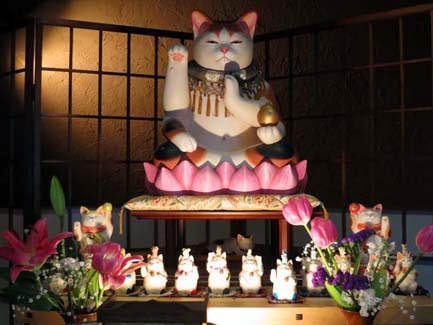 In former times, the Cat was an important "Deity" to help protect the silk worm farmers from the many mice. Mori Wajin doubled this deity with Yakushi Nyorai. 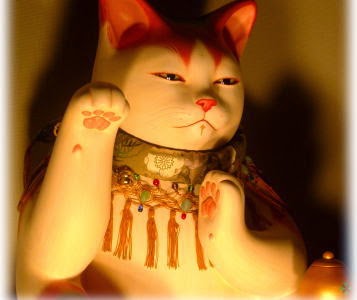 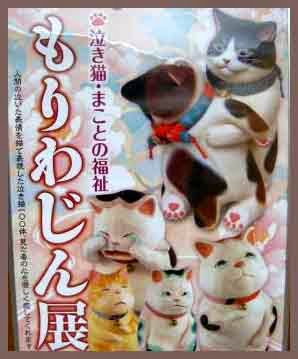 Once upon a time
in 根津村 Nezu village a 六部 Rokubu Pilgrim took a retreat 長命寺大日堂 in the Dainichi Hall of the temple Chomei-Ji, when many young cats gathered around him and begun chanting:
国分寺の「小太ばば」来なけりゃ踊りにゃならん
"If Koda Baba from Kokubun-Ji does not come here, we cyan't dance!"

After a while a huge monster cat (kaibyoo 怪猫) came down with a storm and begun a wild dance with the small kittens.
Rokubu hit the monster cat with his staff and she fled, splatting blood on the way.

Next day it became clear that the "monster cat" was in fact an old grandmother in the home of Kotaro in the hamlet next to Kokubun-Ji.
So Rokubu went to visit her and saw that the old hag had hurt her leg on the spot where he had hit the cat last night.

To save her soul Rokubu begun to pray to Yakushi Nyorai and in a short while the cat showed her true nature and fled to the mountain 尾野山 Onoyama.
When the family searched the house, they found the bones of an old woman hidden under the veranda.
To our day, there is a stone marker with the inscription Rokubu 「六部」 in the compound of Kokubun-Ji

When a child cries and mother does not know what to do about it, she tells it
"Here comes the karaneko cat of Yakushi Sama!".
薬師様のカラ猫だぞ

Once upon a time
there was a Yakushi Do Hall dedicated to Yakushi Nyorai in the village of 賀露（かろ）町 Karo-Cho, which had been build by 伏野長者 the rich Village Elder Fushino of Koyama 湖山長者.
He lived comfortable with many servants and one cat, well beloved by him and the maid servants. Fushino had taught his cat how to say prayers and live a benevolent life.
But his wife did not like cats at all.
(The story about the cat continues below.)

When Fushino died, there was nobody to say prayers and venerate at the Yakushi Hall any more. It declined rapidly.
Then one night, the villagers saw a strong light at the top of Mount Koyama 湖山. This happened for many nights in a row, so the villagers went up to the mountain top and there they found the statue of a Buddha sitting under a pine tree.

"If a Buddha is sitting here, it must be a blessed place for rituals. Let us take the statue back home to venerate it."
The young folks of the village brought it downhill and all villagers could pray to it now.
Then someone realized what had happened:

"This is the Yakushi Nyorai of Karo village. He must have felt homesick for Mount Koyama and come back to sit there!"
So they hurried to built a small hall for the statue and found a priest named 浄西坊 Kiyonishi Bo for the daily duties.

One day when priest Kiyonishi was saying his daily prayers he saw a light shining from under the statue. When he stretched out his arm to touch in, it was the mummy of a cat with red hair and its eyes where still shining.

That night he had a dream and a cat talked to him:
"I am the cat of the rich village elder Fushino of Mount Koyama.
But his wife did not approve of my living in their home and I was kicked out.
I lived in 因幡山 Mount Inabayma for a while. One maid servant of Fushino once came to search for me and we had a talk, but I stayed on. As a present, I gave a white envelope to the maid servant.
When the maid opened the envelope back home, there was a painting of a dog inside, and 10 large pieces of gold. 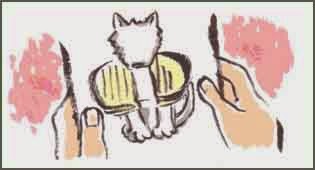 Fushino's wife was surprized, but soon had a plan.
"If the maid got 10 pieces of gold, I am sure they will give 100 to me, the Lady of the House" and off she went to Inabayama.
She stayed there over night, but when she opened the sliding door just a bit to have a peek into the other room, she saw a huge white cat, just ready to jump at her.
The lady was too afraid and could not move in her shock.
At this moment the cat that had lived in her home turned up too and said:
"Remember, you have always been so mean to me. Now I get my revenge!"
and the cat jumped to the throat of the woman and bit her to death.

(Now the legend goes back to Yakushi san and the story the cat told in the dream.)

One day I was walking near the fields when the area suddenly flooded and became a pond and me, not able to swim, was swept right into the middle of the new pond (Koyama Ike 湖山池), getting weaker and weaker as I struggled to stay above water. Finally I died.
My body stayed there and eventually became a small island, 猫島 Nekojima, "Cat Island".
The Village Elder had taken good care of me while I was still alive.
So when I died I did not leave this world, became a mummy and now are back to help others!" 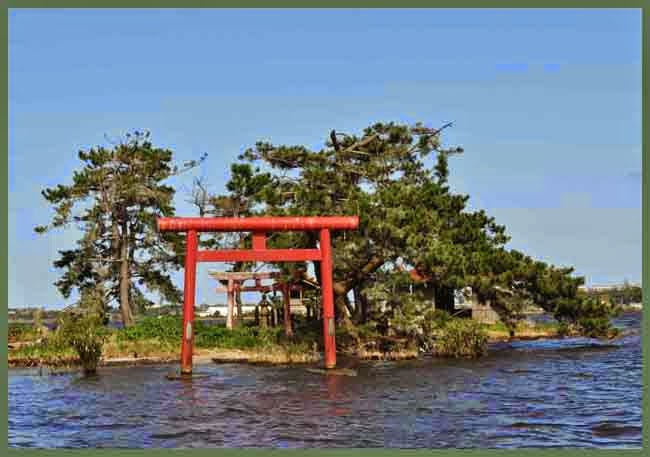 Just then Kiyonishi woke up from his dream.
He remembered that a cat with red hair had come to his place to live here about 5 or 6 years ago. This cat used to put its paws together like a human being in prayer. This must have been the cat from the Village Elder, now become a mummy.

When he had reasoned so far, Kiyonishi jumped out of his bed, took the mummy of the cat, placed it in a small sanctuary and placed it at the right side of Yakushi Nyorai in his temple.

Since then, Yakushi from Koyama has been called "猫薬師 Neko Yakushi" "Yakushi the Cat".
And of course, in the temple hall there are no mice at all.

Farmers come here to get a special amulet that will keep the mice out of their homes and rice storage.
If something is lost and people come here with a prayer sincerely to find it, indeed, it will soon be found.


- quote -
Koyama Pond Area
Close to Hakuto Beach, with a plentiful amount of sweetbriers.
A lagoon separated from the sea by deposits from the Sendai River.

The Koyama Pond is located 6 kilometers west of central Tottori City in eastern Tottori, close to Tottori Airport. It was an inlet of the Sea of Japan, but became a closed lagoon when deposits from the Sendai River separated it from the sea. There are seven islets in the pond, and the largest, Aoshima, has a park with a well-equipped promenade and camping ground.

This pond, being 4 kilometers long from east to west and 2.4 kilometers wide from north to south, is almost a lake in size and is a sanctuary for eels, carp and other freshwater fish. They still practice a traditional style of fishing there, called "Ishigama-ryo," where fishers form a trap with large rocks and wait for the fish to enter.
- source : www.jnto.go.jp/eng - 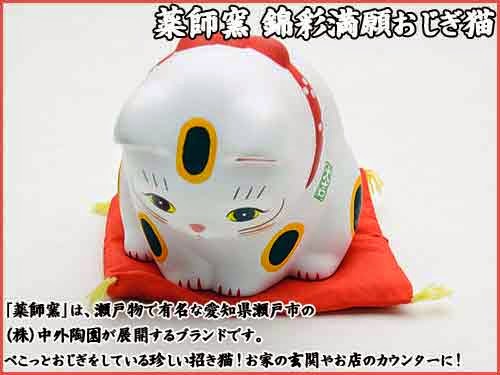 The name of this kiln dates back to a legend of Gyoki Bosatsu, who had built a small sanctuary for Yakushi Nyorai 薬師如来の祠, which was in the compound of Chugai Toen Company till the end of the Edo period.

It was said to be able to cure eye disease and removed to the temple Hoosenji 宝泉寺 Hozen-Ji, where to our day there is a festival in honor of Yakushi Nyorai, O-Yakushi San 「お薬師さん」 in November (from 8 to 12).

Since its founding the Yakushi Kiln has been protected by Yakushi san and has been able to produce many items that make people happy and feel well. Some are amulets to prevent eye disease. 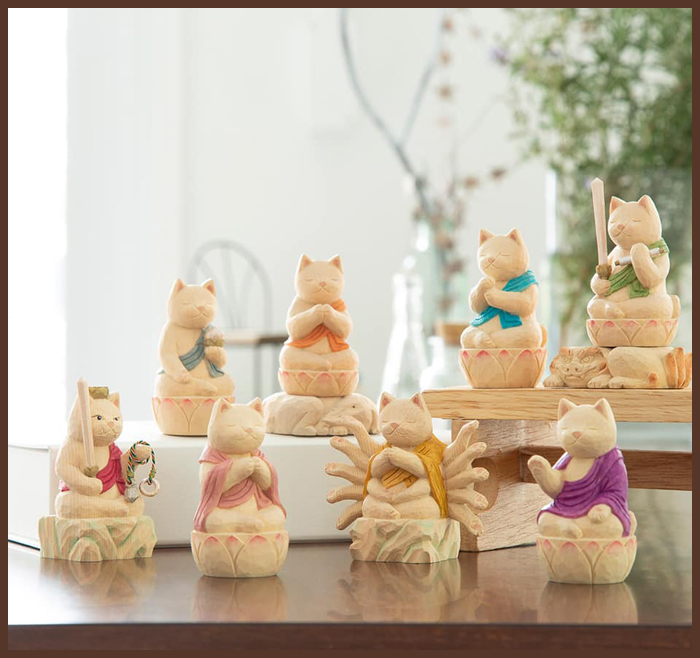