- quote
In the Wake of Lafcadio Hearn Part 1 and 2

. . . "We cross the broad opening of the bay, journey along another half-mile of ghastly sea-precipice, and finally make for a lofty promontory of naked Plutonic rock. We pass by its menacing foot, slip along its side, and lo! at an angle opens the arched mouth of a wonderful cavern, broad, lofty, and full of light, with no floor but the sea. Beneath us, as we slip into it, I can see rocks fully twenty feet down. The water is clear as air." 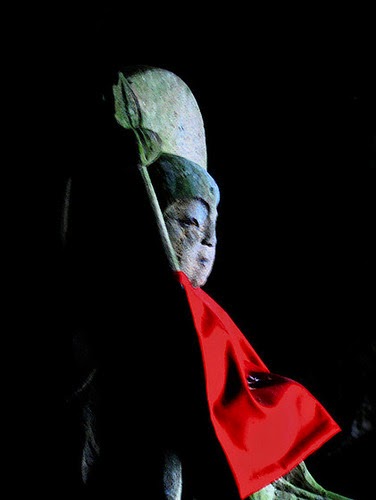 . . . "This is the legendary Fountain of Jizo,
the fountain of milk at which the souls of dead children drink. Sometimes it flows more swiftly, sometimes more slowly; but it never ceases by night or day. And mothers suffering from want of milk come hither to pray that milk may be given unto them; and their prayer is heard. And mothers having more milk than their infants need come hither also, and pray to Jizo that so much as they can give may be taken for the dead children; and their prayer is heard, and their milk diminishes." . . .

. . . "Far within the dusk I see the face of a Jizo, smiling in palestone, and before him, and all about him, a weird congregation of grey shapes without shape--a host of fantasticalities that strangely suggest the wreck of a cemetery. From the sea the ribbed floor of the cavern slopes high through deepening shadows hack to the black mouth of a farther grotto; and all that slope is covered with hundreds and thousands of forms like shattered haka. But as the eyes grow accustomed to the gloaming it becomes manifest that these were never haka; they are only little towers of stone and pebbles deftly piled up by long and patient labour." 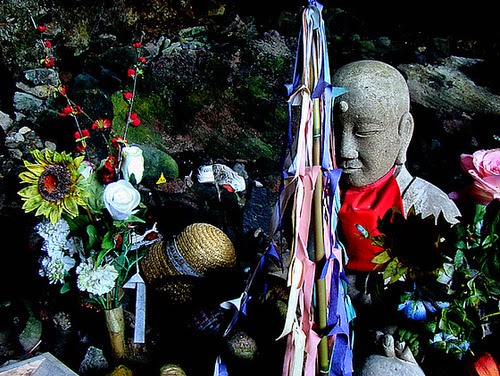 . . .
"Had we come earlier, the boatwoman says, we should have seen many more. For 'tis at night, when the soil of the cavern is moist with dews and drippings from the roof, that They leave Their footprints upon it; but when the heat of the day comes, and the sand and the rocks dry up, the prints of the little feet vanish away."

"Farther on, I find other figures of Jizo, single reliefs, sculptured upon tombs. But one of these is a work of art so charming that I feel a pain at being obliged to pass it by. More sweet, assuredly, than any imaged Christ, this dream in white stone of the playfellow of dead children, like a beautiful young boy, with gracious eyelids half closed, and face made heavenly by such a smile as only Buddhist art could have imagined, the smile of infinite lovingness and supremest gentleness. Indeed, so charming the ideal of Jizo is that in the speech of the people a beautiful face is always likened to his-'Jizo-kao,' as the face of Jizo."

"As I pen these lines, there returns to me the vision of a Kyoto night. While passing through some wonderfully thronged and illuminated street, of which I cannot remember the name, I had turned aside to look at a statue of Jizo, before the entrance of a very small temple. The figure was that of a kozo, an acolyte-a beautiful boy; and its smile was a bit of divine realism. As I stood gazing, a young lad, perhaps ten years old, ran up beside me, joined his little hands before the image, bowed his head and prayed for a moment in silence. He had but just left some comrades, and the joy and glow of play were still upon his face; and his unconscious smile was so strangely like the smile of the child of stone that the boy seemed the twin brother of the god. And then I thought: 'The smile of bronze or stone is not a copy only; but that which the Buddhist sculptor symbolises thereby must be the explanation of the smile of the race."