a surplice, an oblong piece of ornamental cloth worn over the robe by a Buddhist priest 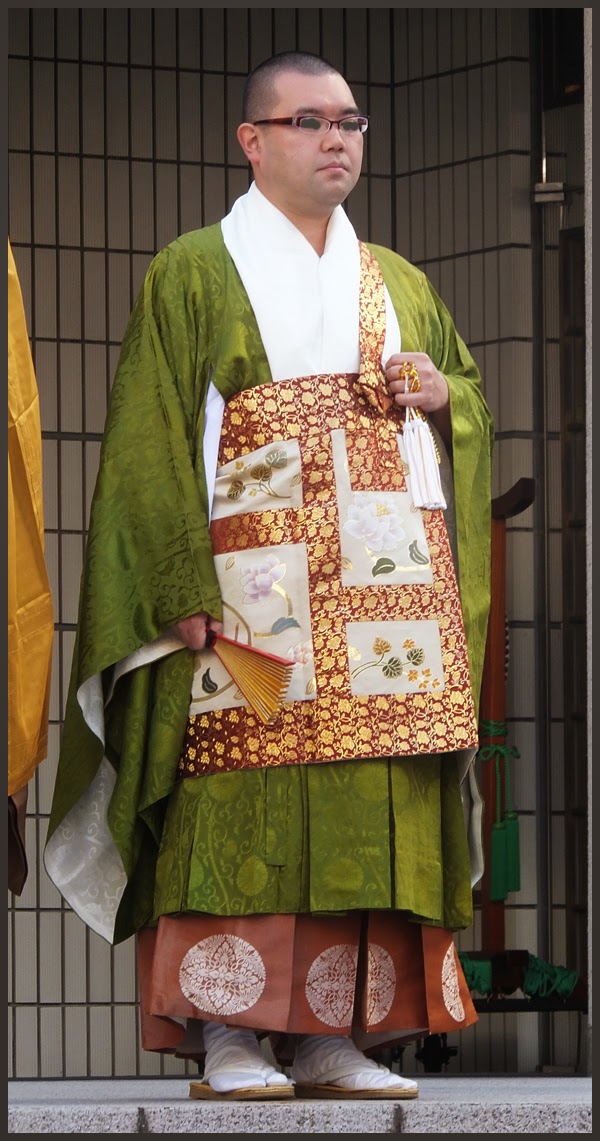 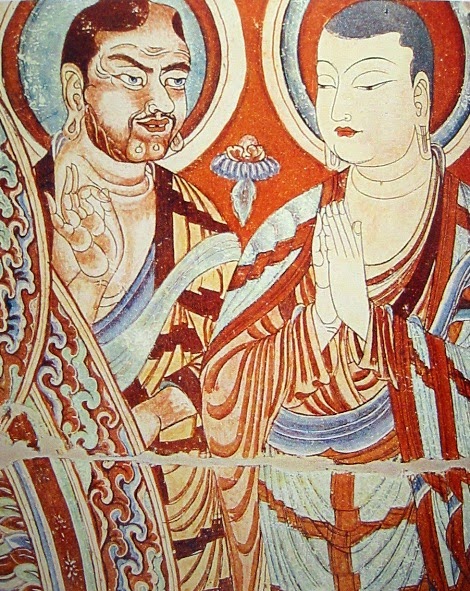 Origin and construction
Buddhist kāṣāya are said to have originated in India as set of robes for the devotees of Gautama Buddha. A notable variant has a pattern reminiscent of an Asian rice field. Original kāṣāya were constructed of discarded fabric. These were stitched together to form three rectangular pieces of cloth, which were then fit over the body in a specific manner. The three main pieces of cloth are the antarvāsa, the uttarāsaṅga, and the saṃghāti. Together they form the "triple robe," or tricīvara. The tricīvara is described more fully in the Theravāda Vinaya (Vin 1:94 289).

Antarvāsa
The antarvāsa is the inner robe covering the lower body. It is the undergarment that flows underneath the other layers of clothing. It has a large neck, and almost entirely covers the torso. In representations of the Buddha, the bottom of the antarvāsa usually protrudes, and appears in the rough shape of a triangle.

Uttarāsaṅga
A robe covering the upper body. It comes over the undergarment, or antarvāsa. In representations of the Buddha, the uttarāsaṅga rarely appears as the uppermost garment, since it is often covered by the outer robe, or saṃghāti.

Saṃghāti
The saṃghāti is an outer robe used for various occasions. It comes over the upper robe (uttarāsaṅga), and the undergarment (antarvāsa). In representations of the Buddha, the saṃghāti is usually the most visible garment, with the undergarment or uttarāsaṅga protruding at the bottom. It is quite similar in shape to the Greek himation, and its shape and folds have been treated in Greek style in the Greco-Buddhist art of Gandhāra.

In Japanese Buddhism,
the kāṣāya is called kesa (Jp. 袈裟). 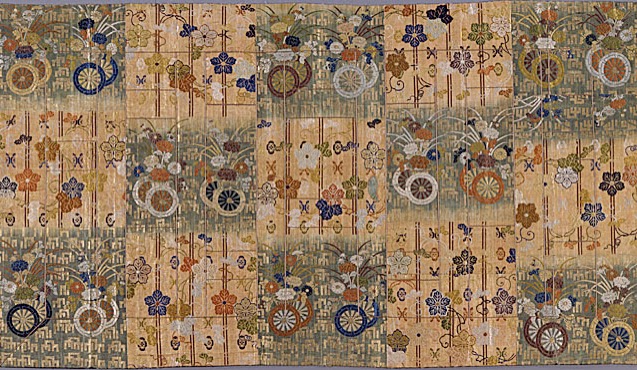 In Japan, during the Edo and Meiji periods, kesa were even sometimes pieced together from robes used in Noh theatre.
- - - More in the WIKIPEDIA ! 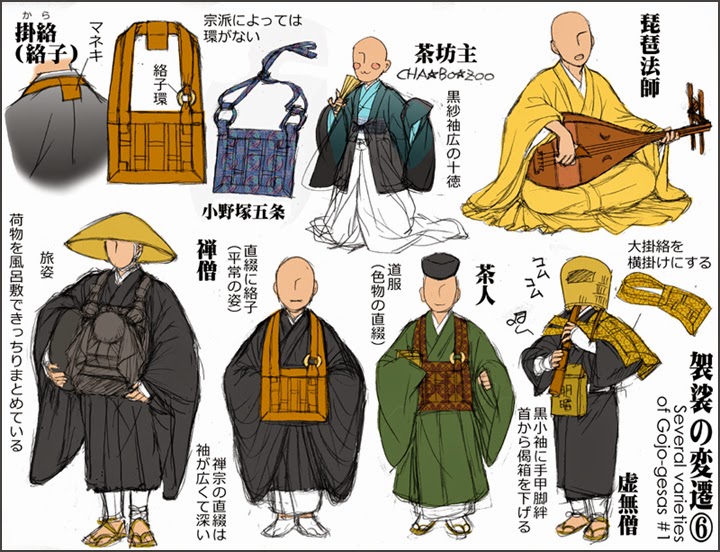 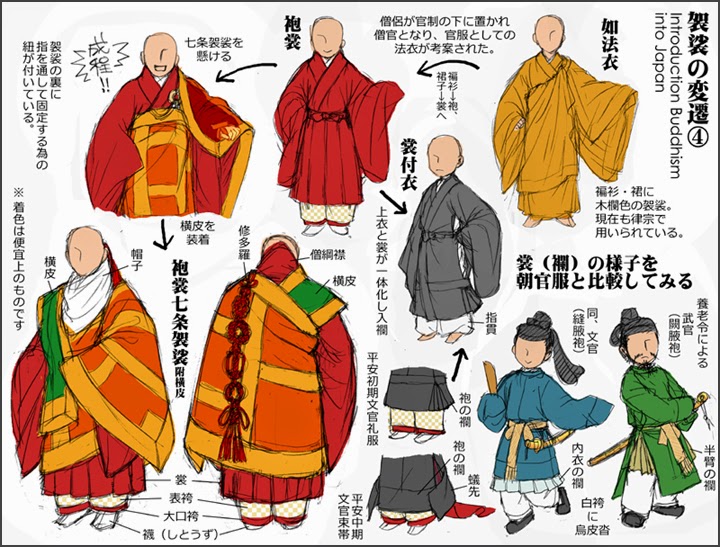 - quote
A rectangular ceremonial vestment that is worn draped over the left shoulder by Buddhist monks in East Asia and is emblematic of the robes originally worn by Buddhist monks in India. All kesas are pieced robes (kassetsue 割截衣), made with five, seven, nine, or more panels of cloth that are sewn together. The panels themselves comprise both long and short pieces of cloth.

The word kesa originated as a Chinese transliteration of the Sanskrit kāṣāya or "ochre," an earthy pigment containing ferric oxide that varies from light yellow to brown or red. Buddhist monks in India were originally supposed to wear robes made from discarded cloth that was ritually polluted or literally filthy.

The procedure was to cut out usable pieces of cloth, wash them, sew them together, and dye the resulting garment with ochre. From that uniform color, Buddhist patchwork robes in general came to be called kāṣāya. As the monastic institution evolved, new cloth for robes came to be provided by lay donors, but the practice of cutting the cloth into small pieces and sewing those together to make robes was retained.

Buddhist monks in India were allowed three types of kāṣāya:

In the colder climates of Central Asia and China, however, the Indian mode of dress was often insufficient, so monks from those regions wore their native clothing and draped the Indian upper robe or full dress robe on top of that. In China, the word kāṣāya was transliterated as jiasha 袈裟, which is pronounced kesa in Japanese. Worn over a Chinese-style full-length sleeved robe that was tied at the waist with a belt or sash, the jiasha (kesa) lost its function as a practical piece of clothing to cover and protect the body but retained its meaning as an emblem of membership in the monastic order.

As vestments used only when formally dressed for solemn Buddhist observances, there was a tendency for jiasha to evolve into finery, crafted from pieces of colorful brocaded silk. Soto monks today receive three kesas upon their ordination. →"robes," "three robes," "long robe," "rakusu."
- source : global.sotozen-net.or.jp 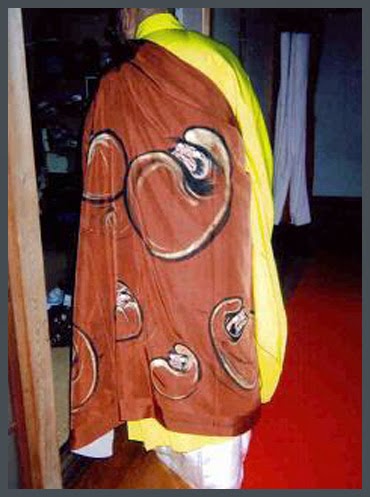 . Daruma in the legends of Japan . 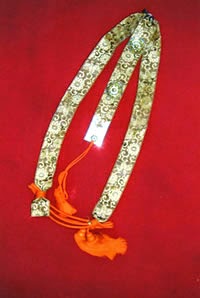 
- quote
Shugendo - Doctrines Costumes and Tools symbolism
There are ranks, according to a number of pilgrimages carried out and years of practice which is noticed with the color of Yui-Gesa and its pompons(light blue and marine blue for the beginners) and of the color of the cord which girds the size (yellow for the lay ones).
Yui-gesa (or Fudo-kesa, Bonten-kea or Machikon-kesa):
The kesa is the large buddhist toga of the monks, the clothing monastic designed by the Gotama Buddha starting from 9 bands of menstrual linen bent in only one roll of material. This fabric little practises in mountain, where it would tear easily with the rocks and the branches, was folded in only one fabric band to which one added 6 pompoms to symbolize the 6 virtues.
It is a pectoral white (Shiroi ginran bonten kesa) for the monks and chestnut (Cha iro ginran bonten kesa) for the lay practitioner, with reasons encrusted out of gold with sheets with Ginko-Bilobab (symbol of asceticism in the Honzan school). 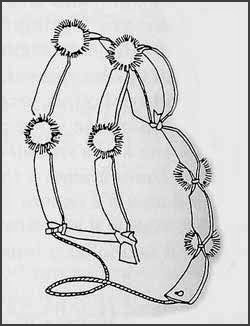 The color indicates the rank:
Marine blue for the lay beginners and white in the confirmed religious ascetics who practise the difficult retreats (hara-gyô, between 100 and 1000 days). In all the Schools of shugendô, all the yamabushi can be recognized at first glance from a distance by the Kesa worn before even exchanging the first codes of membership of the group. Moreover there is a brotherhood between all the schools of Shugendô: Shugen Kosyukai which gathers Shogoin, Sanpoin, Shozenin, Kimpusenji and Tonanin, Kizoin, Sakuramotobô, Chikuriin, Ryusenji, the sanctuaries of Nachi and Kumano, various affiliated temples of the province of Yamato (Kansai; Kyoto, Nara, Wakayama, Osaka and Mie), of Kanto (area of Tokyo), and of Kyushu and others without distinctions of class nor of doctrines in order to preserve and to preserve intact the teaching and the study of Shugendô. In Shugendô Bonten-kesa is a sign of recognition and membership.
This is the collar of the Fudou Buddha.
- source : www.shugendo.fr

Legend from Nara, 宇陀郡 Uda district 大宇陀町 Ouda town
.
At 光明寺 the temple Komyo-Ji around 1682, at the burial of a farmer's wife there was a thunderstorm. The priest 憲海上人 Saint Kenkai placed a kesa 袈裟 priest surplice around the coffin and threw a statue of Amida Nyorai toward the West. The weather cleared very soon and the old cat of the temple died. The statue of Amida had hit the eye of the cat.
Since then they never keep cats at this temple.
.
https://gokurakuparadies.blogspot.com/2020/05/komyoji-fudo-nishirokugo.html
.

Legend from Aomori
.
. guhin kuhin gubin 狗賓 / 狗嬪 / グヒン Guhin Tengu Yokai .
At the 明神堂 Myojin-Do Hall on top of the hill in 林崎 Hayashizaki the kesa 袈裟 priest's surplice of 慈覚大師 Jigaku Daishi is buried.
Once a woman climbed up there and stepped on the earth, but a Guhin 狗賓 Tengu came and produced a lot of rain to clean the ground.
Since then no women are allowed to climb the mountain.
.
https://gokurakuparadies.blogspot.com/2020/12/jigaku-daishi-ennin-legends.html
.