Under shinbutsu-shūgō, a system of syncretism of Buddhism and kami worship, the site was both a Shinto shrine and a Buddhist temple. The Tanzan Shrine and Tōnomine-ji coexisted on the same site. Tōnomine-ji had two subtemples located within its precincts, Myōraku-ji and Shōryō-in (聖霊院). The shrine received significant financial support from the Tokugawa bakufu during the Edo period (1603 – 1868).

During the anti-Buddhist shinbutsu bunri movement after the Meiji Restoration of 1868 Tanzan Shrine was designated solely as a Shinto shrine dedicated to the worship of the kami of Fujiwara no Kamatari. The Buddhist structures of the shrine were rededicated as Shinto structures. Under the Modern system of ranked Shinto Shrines, the Tanzan Shrine was designated a bekkaku kanreisha in 1874, an Imperial shrine of special status. The shrine lost this designation after the abolition of the ranked shrine system after World War II. 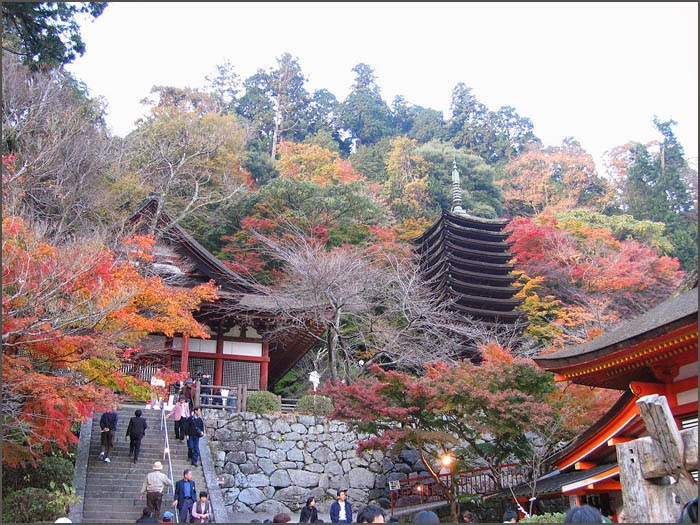 The present thirteen-story wooden pagoda was built in 1532, and is a reconstruction of the structure built by Jo'e in the Asuka Period. The pagoda is designated an Important Cultural Properties of Japan. The honden, or main hall, is built in the Kasuga-zukuri style. It is dedicated to Fujiwara no Kamatari.

A Kemari Matsuri, or kickball festival, is held every year on April 29 and the second Sunday in November. On this day, people in ancient costumes and arranged in a circle play a form of football in which they kick a ball made of deerskin to each other.
- source : en.wikipedia.org 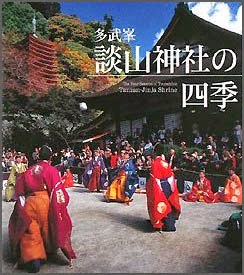 Tanzan-Jinja Shrine enshrines Fujiwara Kamatari (614-669 A.D.), who was a meritorious Interior Minister in Japan in the 7th century. It is well known that he played an important role in the " Reformation of the Taika Era ", together with Prince Nakano-oeno-oji (Emperor Tenji).

When Kamatari died at the age of 56, his tomb was built on Mt. Ai (Jap. Ai-yama) in the Province of Settsu (today's Osaka). In 678 A.D. the tomb was moved to Mt.Tonomine, where Kamatari used to ponder over the plan for the Reformation; a thirteen-storied memorial Stupa was erected next to his tomb. In the year 701, a shrine building was constructed on this site, and Kamatari's statue was enshrined in it. This is the origin of Tanzan-Jinja Shrine. 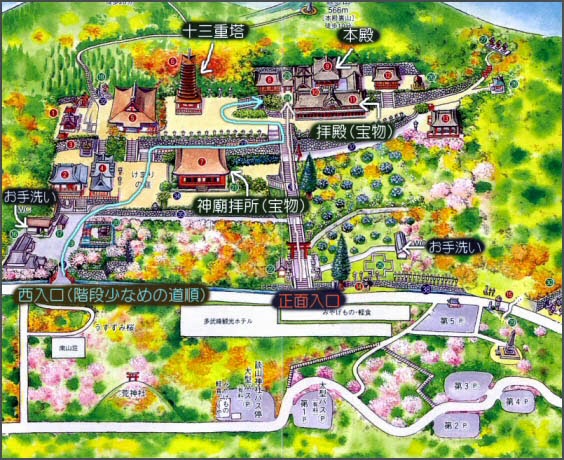 Today, Tanzan-Jinja Shrine is noted not only in connection with Kamatari but also for the Cultural Properties which it has been keeping. Fifteen shrine structures including the Main Hall and the Thirteen-Storied Pagoda, are jointly designated as an Important Cultural Property, and the dome from the three-storied miniature pagoda, which was originally in Ohara-dera temple, is registered as a National Treasure. Many important artworks and historical records from the Heian to the Edo periods (the 8th to the 19th centuries), such as Buddhist statues, illustrated hand-scrolls, several applied art objects, swords, and old shrine documents are included in the shrine treasures.

- Homepage of the Shrine
- source : www.tanzan.or.jp/eng 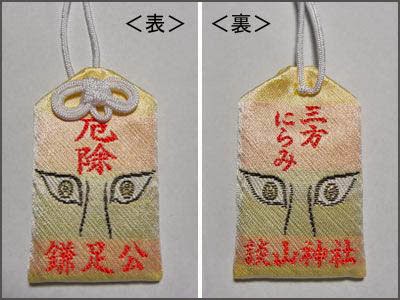 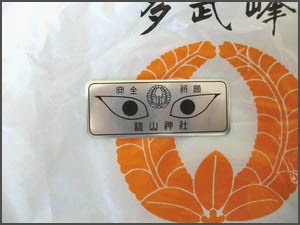 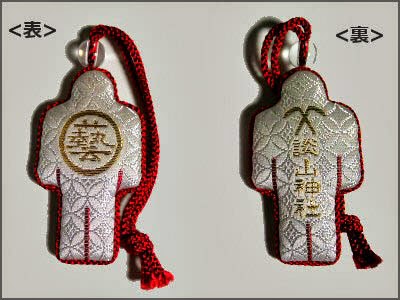 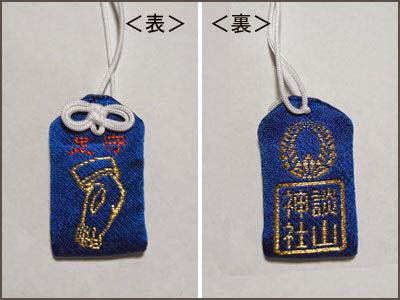 - quote
Tanzan Shrine is located in the mountains just east of the Asuka region. It enshrines Fujiwara Kamatari, the founder of the powerful Fujiwara family, who exerted enormous political influence and essentially governed the country for most of the Heian Period (794-1185).

Visitors may feel that the shrine seems more like a temple, and indeed for most of its existence it was. Originally known as Tonomine Temple, it was converted into a shrine during the Meiji Period (1868-1912), when the government made efforts separating and emancipating Shinto from Buddhism as Japan's state religion. 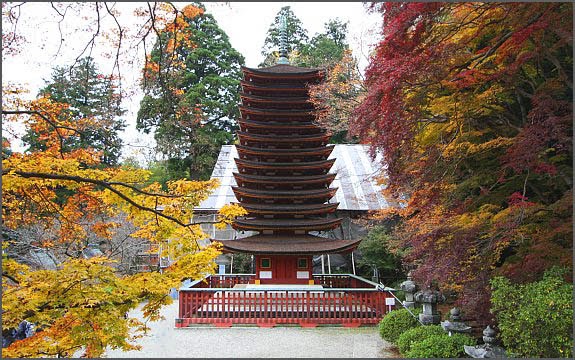 At the top of the steps stands a unique 13 story pagoda, which was built in 1532 during the Muromachi Period and stands 17 meters tall.
To the right is a complex of buildings that includes the shrine's main hall and an open balcony that is one of the most attractive spots on the shrine grounds, particularly during the autumn color season.
- source : www.japan-guide.com


Look at the photo collection from a visit by Jake Ojisan

The pagoda was built on top of the bones of Kamatari Nakatomi by his son Joe Fujiwara and the temple was primarily a private family mausoleum until later when it came under the wing of the Tendai sect and expanded. 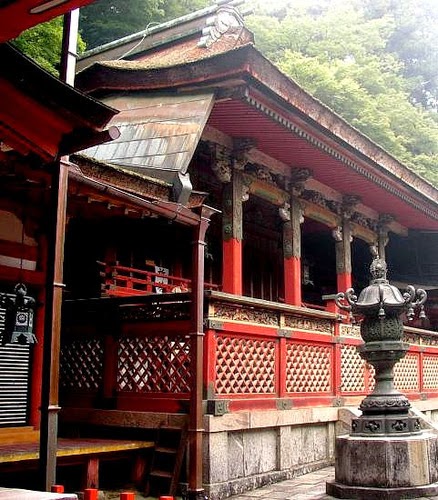 
Fujiwara no Kamatari 藤原釜足
The origins of the name Kamakura

On the hill behind the temple lies a small shrine called
Kamatari Inari Shrine (鎌足稲荷神社, Kamatari Inari Jinja) which, in spite of its insignificant appearance, is of a certain historical importance both because of its age (it dates back to the seventh century) and its role in a legend related to Kamakura's name.

The plaque next to the shrine explains that kami Inari gave young Fujiwara no Kamatari (藤原釜足) a sickle which would magically protect him as long as it was in his possession. In 645 A.D., having defeated Soga no Iruka, Kamatari came to the Kantō and there he dreamed of Inari, who told him:

"I gave you the sickle to protect you,
but now that you have achieved your goal of defeating Iruka,
you must give it back to me and to the land."

Kamatari buried the sickle, and in the spot was erected the shrine that carries his name. According to the same legend, the name Kamakura means "the place where Kamatari buried his sickle". 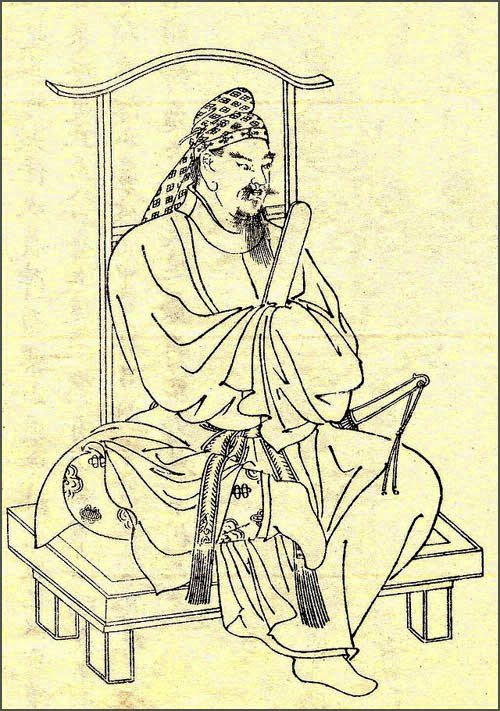 Kamatari was born to the Nakatomi clan and became the founder of the Fujiwara clan. He, along with the Mononobe clan, was a supporter of Shinto and fought the introduction of Buddhism to Japan.
© More in the WIKIPEDIA ! 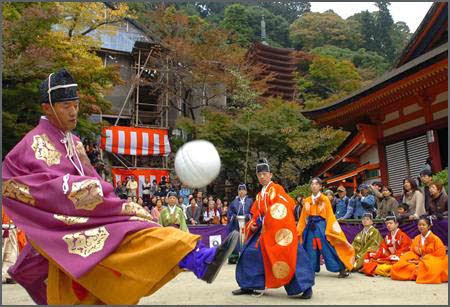 the red autumn leaves
at Tanzan falling
in the Kickball Garden

Email ThisBlogThis!Share to TwitterShare to FacebookShare to Pinterest
Labels: - - - TTT - - -