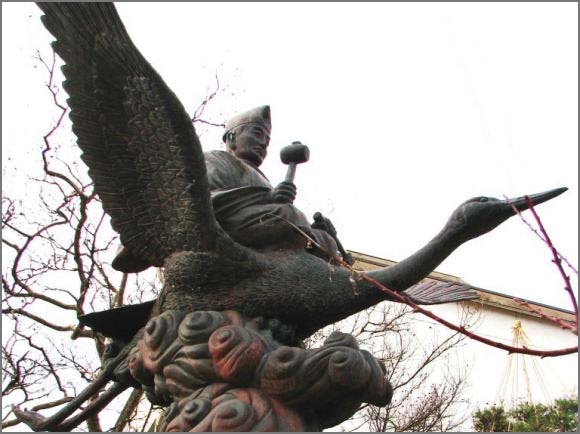 Most probably he was a master carpenter of Hida Takayama. The statue shows him with a chisel and hammer.
He could carve a crane and make it fly around, or carve a cat and it would catch mice.
. Hida no takumi 飛騨の匠 expert carpenter or craftsman from Hida .
They were already well known in the Heian period.

Later he was 飛龍隊の兵士 in the Imperial guard of "the flying dragons" in China.

- quote -
“…’Golden Butterflies’ is about a Japanese immigrant living in the T’ang dynasty China (619-905), probably one of the many Japanese students and pilgrims who went to China during the early T’ang to learn Chinese arts and sciences for their own newly developing nation of Yamato (Japan).
The name of this particular individual, Han Shih-ho (Han Shiho, or in Japanese, Kan Shiwa) would seem to indicate that he was in fact of fairly recent Chinese or Korean ancestry, as were many families among the upper classes of ancient Japan and in the craft guilds they patronized. Kan Shiwa was a master craftsman, one of the professional pursuits traditionally associated with Taoism.
Although stories about him mention no details on this point, he was evidently also a martial artist, another profession with traditional Taoist connections, for he served in the imperial guard of the ruling house of the T’ang. His story illustrates a number of Taoist ideas. His ability to make lifelike moving replicas of insects, animals, and birds represents what is sometimes called taking over creation, the power to infuse inert matter (the physical body) with vitality, energy, and spirit. The relationship between the color of his mechanical insects and the 'food' he gives them illustrates the way personality is formed by education and environmental influences.
The story of the golden butterflies represents the Taoist theory of 'equalizing things' in worldly terms, through redistribution of wealth by nonviolent means."
-from Vitality, Energy, Spirit: a Taoist Sourcebook // translated and edited by Thomas Cleary (p.37-38)


- quote -
GOLDEN BUTTERFLIES
"In the time of the emperor Mu-tsung (Muzong) of the T’ang dynasty, in the ninth century, among the members of the elite corps of the imperial guard was a Japanese man named Kan Shiwa.
Kan Shiwa
was a most extraordinary sculptor. He could fashion any sort of bird and make it so that it could drink water, hop around, stretch out its neck and call, and so on, all in the most beautiful and charming manner. He put machinery in the bellies of the birds he made, so that besides having beautiful plumage they could also fly one or two hundred feet in the air.
Also,
Shiwa sculpted cats that could do even more; they could run around and even catch small birds.
Now the captain of the guard thought this was truly marvelous, and wrote to the emperor about it. Emperor Mu-tsung summoned Kan Shiwa into his presence, and he too was captivated by Shiwa’s skill.
The emperor asked Shiwa
if he could carve something yet more marvelous. Shiwa told the emperor he would make a 'dais for seeing dragons.'
..... Not without misgivings, the emperor stepped up. The moment he did so, a gigantic dragon appeared in the sky. It was about twice the size of a man and had scales, a mane, claws, and horns; it flew into the clouds and rode on a mist, dancing in the sky. Its energy and appearance were such that one would never think it to have been made by human hands.
The emperor
was flabbergasted. Frantically he jumped off the little platform and said, 'Fine, fine, very good, now take it away with you!'
Strange to say, the moment he got off the dais the big dragon disappeared. All that remained was to put it back in its place.
Now Shiwa apologized to the emperor for startling him so, and offered to make good by doing something amusing. .....
- source : theparhelia.com/blog/2017... -


- quote -
..... Shiwa made some small things, "They are like spiders, they are flycatchers."
"Are they real?" the emperor asked, amazed by their lifelike quality.
"No, they are manmade," Shiwa answered. . . .
Catching the flies, one by one they returned to Shiwa's palm.
The emperor marveled at this. He gave Shiwa a big reward of silver, which Shiwa ungrudgingly gave away to poor people in the city. Now the rumor passed around among the people of the city was that Kan Shiwa was a spiritual immortal from the Isles of the Blest in the East Sea.
Just when this gossip reached its peak, Kan Shiwa disappeared from the imperial guard and no one ever saw him again.
- reference source : The Taoism Reader - Thomas Cleary - 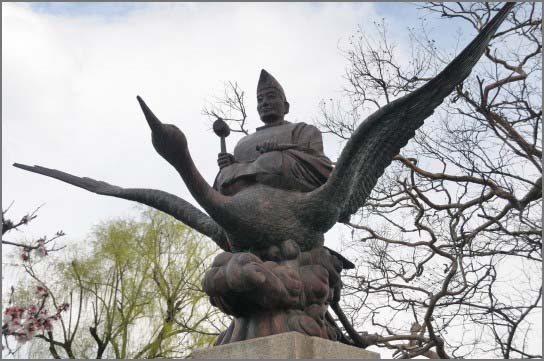 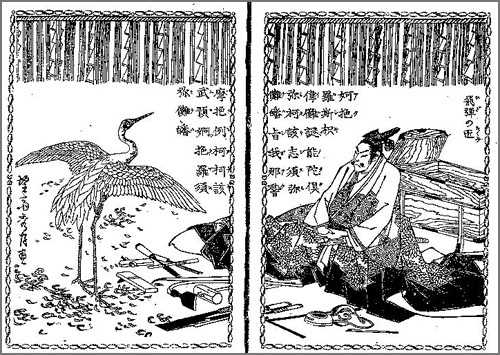