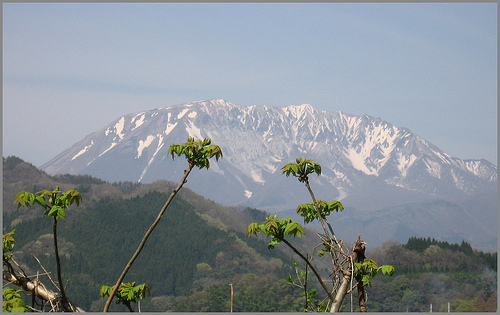 Mount Daisen (大山, Daisen), is a volcanic mountain located in Tottori Prefecture, Japan. It has an elevation of 1,729 meters.
... one of the most important mountain for Japanese Shugendo. According to ‘Izumo Kokudo Fudoki, which was completed the edition in 733, this mountain was called ‘Ookamitake’’, literally, ‘Mountain of the great god.’


- quote
KARASU TENGU: SENTINEL OF DAISEN
Mt. Daisen in Tottori Prefecture lays many claims to fame in the region, but none has inspired more myths and folk stories than that of the legendary karasu tengu. Said to be part human, part crow, often giant in size, these supernatural beings inhabited the sacred slopes and peaks of Mt. Daisen, at that time off limits to all but monks and religious ascetics.
- photo -
These beings were believed to be intermediaries, go-betweens of the human and spirit worlds. In addition to their inter-dimensional powers, they were masters of all human martial arts who delighted in combat. Some speculate their legend was invented by the hermits who inhabited the mountain, in hopes it would scare away trespassers. Others posit that the supposed tengu were actually the strange ascetics who wandered the mountain themselves. Regardless, tales of these fearsome goblins resonated with anyone traveling the shadowy mountain roads after dark. 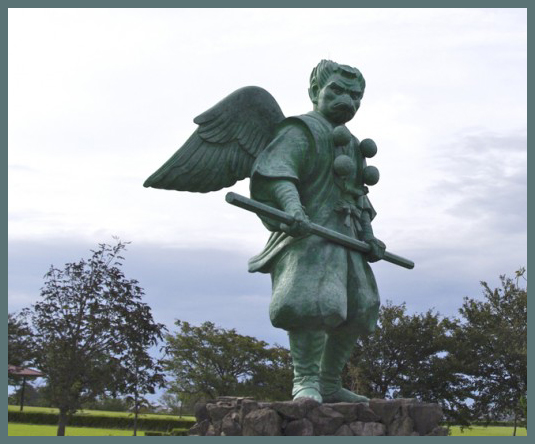 Today, a giant karasu tengu statue stands in Daisen Town, near Hira village. Rising high above the surrounding fields, it stands as a reminder of Mt. Daisen’s sacred past, and the guardians who protected its snowy secrets.
- source : karasumagazine.com/ - Benny Shouga

- quote -
... higher ranked Tengu–Daitengu (大天狗). ... here are only 17 Daitengu,
All the Daitengu possess superior intellect, and whether to the ire or to the honor of the locale (attitudes towards Tengu and whether they are good or bad vary from era to era), they have specific areas they inhabit.

The 7th of these 17 is Hōkibō (伯耆坊),
who resides on Mt. Daisen, the highest mountain of the San’in region.
One of the local famous wagashi (Japanese confectionary) producers in Matsue, Saiundo, has a signature sweet named after the local Daitengu. The Hōkibō sweet has sugar and slightly chunky red beans on the outside with a layer of soft mochi on the inside, and is based off the shape of his fan, as illustrated below. 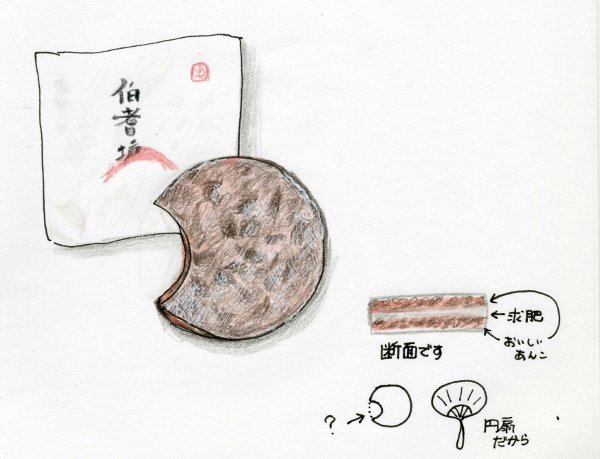 Hōkibō has generally been looked upon favorably by the locals in Tottori, but according to Edo period records, he moved to Mt. Ōyama in Kanagawa to oversee the flocks of Tengu there due to a Daitengu vacancy left after Sagamibō left to comfort a banished emperor. Hōkibō’s name still reflects his original home, seeing as Mt. Daisen is in the old Hōki Province. He also still makes appearances in Daisen Town’s parade of characters in historical costumes.

You know the funny thing about Mt. Daisen and Mt. Ōyama?
They’re both written 大山 (quite literally, “big mountain”).

Seeing as he is often mentioned when the Top Eight of the Daitengu are cooperating in something, such as–under the leadership of the top ranked Daitengu, Sōjōbō of Mt. Kurama near Kyoto–watching over a young orphan of the Genji clan who would eventually grow up to demolish the oppressive Heike clan, as well as be one half of Japan’s most legendary of dynamic duos. It just so happens the other half of that duo was born and raised here in the San’in region, and trained on Mt. Daisen!

This is an ukiyo-e by Tsukioka Yoshitoshi,
one of the last great ukiyo-e artists, although he was known for some rather grotesque subject matter.
Hōkibō is taking Benkei down by his leg, while Sōjōbō sits back and watches with Ushiwaka.

... This is just one interpretation of the famous meeting on Gojo Bridge in Kyoto between Yoshitsune (or Ushiwaka, his childhood name he still used at the time) and Benkei. In general, the start of their story is that Benkei was a powerful naginata user and beat everyone up, but when he was beaten by young Yoshitsune, he swore fealty to him, and this was the start of their semi-historical, semi-fantastical adventures. Their story has been continually expanded upon in literature for hundreds of years with some basic running themes, such as how Yoshitsune trained with Sōjōbō on Mt. Kurama before meeting Benkei. There are many, many stories of young Benkei (called Oniwaka) here in the San’in region, such as how his mother had cravings for iron when she was pregnant with him, so he was born with a black face and strong as iron, but that’s for another time.
- source : saninstory.wordpress.com - - quote -
Ishizuchi Shinkō 石鎚山信仰
Beliefs and practices related to Mt Ishizuchi (1982 m.) in Ehime Prefecture,
Further beyond these places is the most important ritual site, the chain ascent in three places, called Kusari Zenjō, which practitioners scale to reach the summit. From the shrine there, Okunimoya Chōjōsha, the route goes through Raigōdani, the uragyōba (rear practice site), to the highest peak,
Tengudake, associated with a tengu (mountain goblin) called Hōkibō.
- source : - kokugakuin - Suzuki Masataka 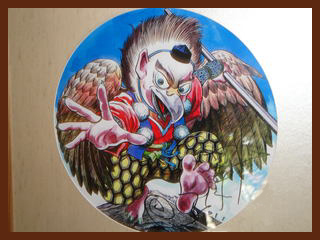 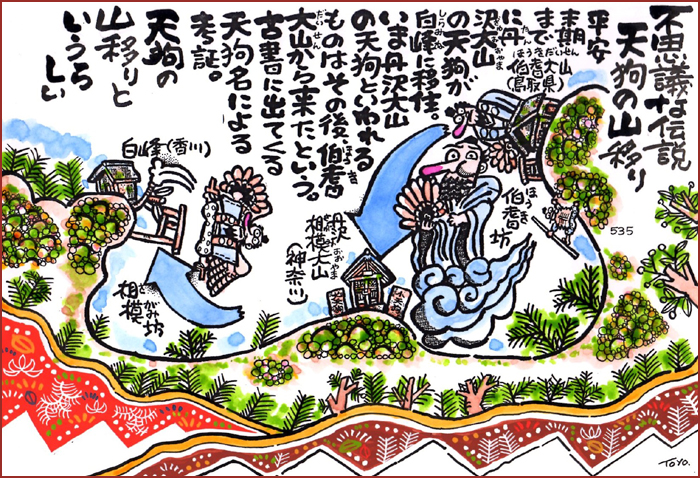 Kanagawa 神奈川県 and Kagawa 香川県
Tengu from 相模大山 Sagami Oyama
Mount Oyama in Tanzawa is famous for the Tengu mountain goblins. The boss of all Tengu is Hoki-Bo.
During the Muromachi period, he came to Tazawa from Mount Hoki Daisen ( 伯耆大山 Daisen) in Hoki / Tottori, since during the wars of that time, the temple ad Mount Daisen, 大仙寺, had been destroyed.
At Mount Oyama, there is the shrine 阿夫利神社 Afuri Jinja, and at its side there is now a stone memorial and hokora for Hokibo.

At Sagami Oyama there lived another Tengu already, 相模坊 Sagami Bo.
Sagami Bo once wanted to console retired emperor 崇徳院 Sutoku-In in his exile in Sanuki (at the end of the Heian period, around 1156)) and had been exiled himself to Kagawa. 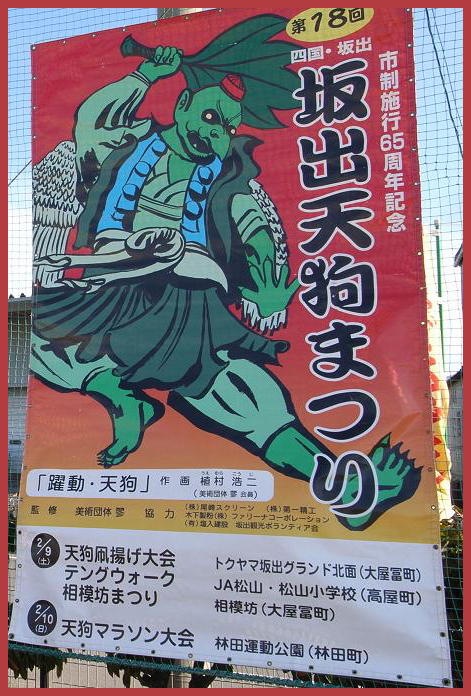 The festival is centered on Saganbo Tengu, a long-nosed goblin from Mount Shiramine near Sakaide that appears in many ancient Japanese folktales. The main events such as the Tengu Walk, Tengu Bazaar and Tengu Kite-Flying Contest focus on this theme. The Tengu Marathons (15km and 5km) are particularly popular, and they attract participants from all over the nation because of the scenic view of the Seto Inland Sea and Seto Ohashi Bridge.
Bowls of udon (hot wheat noodles) with ten no gu (ten kinds of ingredients) are available at every festival site.

Even a Tengu Marathon Walk on high wooden clogs. 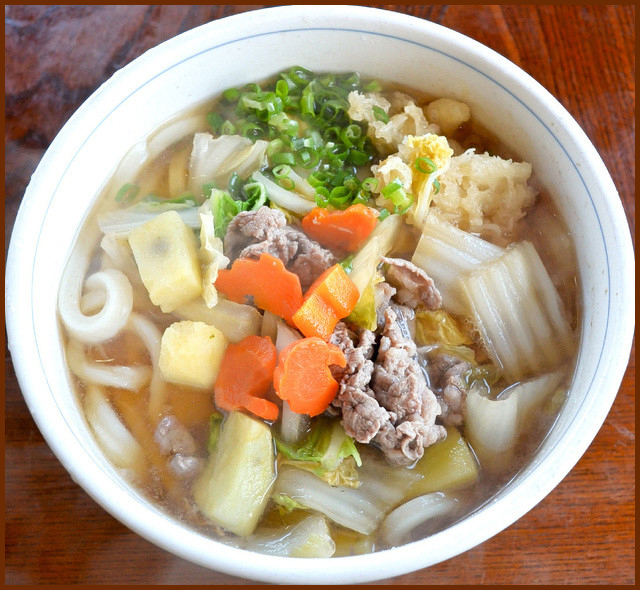 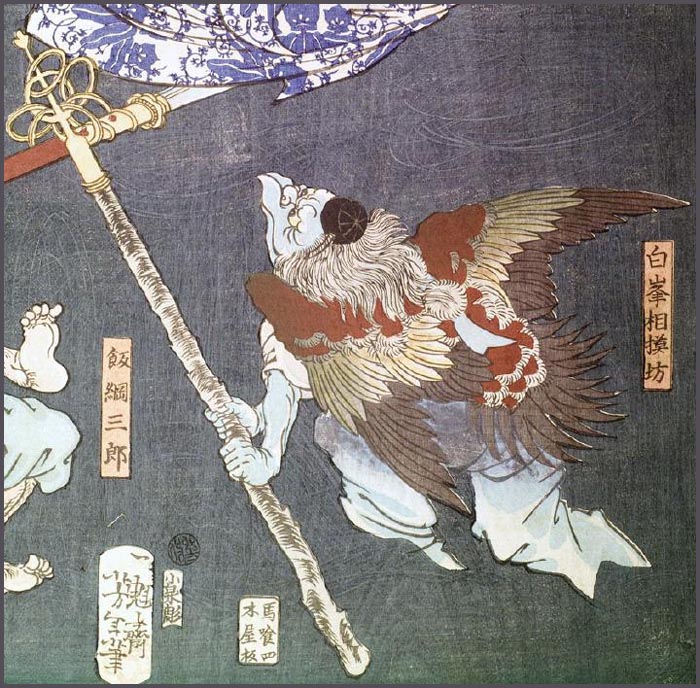 His skin color is green/blue and his hair hangs down to the shoulders. He wears a 頭襟 Yamabushi Tokin on his head. His mouth has a beak like a bird. He wears a 袴 Hakama trouser-skirt. He has large brown wings. 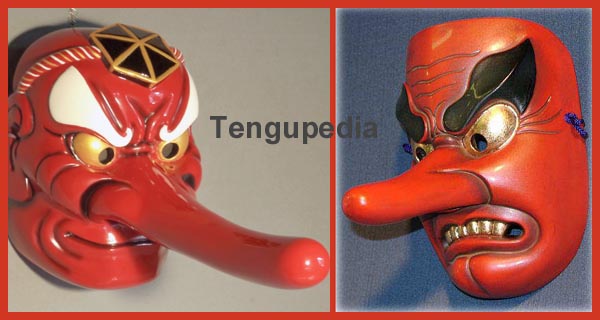