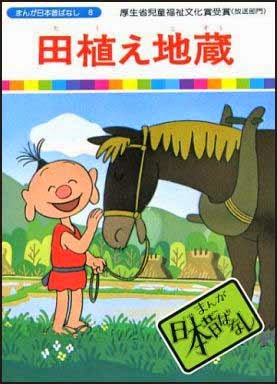 There are some legends about Jizo like this in Japan.


from Izumo no Kuni 出雲の国 Tottori

- quote -
田植え地蔵【The Ta Ue Jizo】
In the old days,
it was the custom to share labor, and to perform labor as a form of tax. This was not voluntary, but compulsory. The story is this:
Once upon a time, near the Grand Shrine of Izumo Taisha, an old couple lived who worshipped a wooden statue of Jizo. Sadly, the wife died. Thereafter, the old man lived alone and he also became ill.

At that same time, the village chief told everyone to come and help plant rice in his fields. The old man, too sick to go, worried about his punishment, and prayed to his family Jizo for mercy. On the day for planting the rice, the village chief called the name of each householder. When the old man’s name was called, a 17-year-old youth stepped forward.

He was accepted in place of the old man and worked so hard and well that the chief gave him a sake cup as a reward when the work was done. The boy put the cup on his head and went home. The next day, the chief came to tell the old man of the boy’s good work. The old man was quite surprised at this, because he knew nothing about such a boy. He felt that the boy had come because of the Jizo, and he went to him to pray. When he confronted his statue and started to pray, he noticed with amazement that there was a cup on the Jizo’s head, and that its feet were covered with mud!

Then he realized that his little god had done the work himself. All over Japan, there are many stories of the Ta Ue Jizo. The two that I have told you concern our own Izumo no Kuni, and I thought you might be interested in them.
It is such customs and stories that have continued to hold my interest in the Izumo no Kuni of legend.
- source : japanese-culture.info

Many farmers venerate a Jizo by the roadside on their daily way to the fields.
So sometimes during the busy season of planting and harvesting, the Jizo comes to help them, taking the figure of a young man working very fast and always cheerful.
Once all the work is done, the stone Jizo is back on his wayside podestal, usually with a lot of mud stains on his body and robe.
Now the farmer can say his "Thank You" prayer. 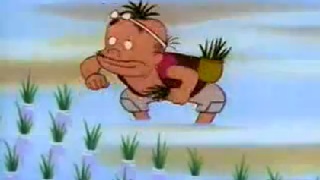 Spiritual Tales of Ti-Tsang Bodhisattva
This Chinese text appeared near the end of China’s Sung dynasty (+ 960-1279 AD) and was compiled by Chang Chin-chi (常謹集). It contained miraculous stories about Jizō that incorporated many earlier Jizō traditions. Included are tales about people who escape from hell thanks to Jizō, tales of people who are reborn in Miroku’s Tusita heaven or other Buddhist heavens, of deceased parents suffering in hell who are delivered from its torments, and stories where Jizō takes the place of certain hell dwellers to save them from danger. Such miracles were made possible by the pious offerings of living relatives who made pictures and statues of Jizō. 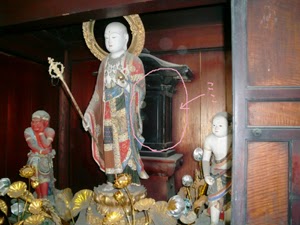 - quote -
This is a story told by the priest of the temple 伊馥寺 Ifuku-Ji
253 Izawacho, Matsusaka, Mie.

The photo does not show the rice-planting Jizo.
The Taue-Jizo is in a small hall in the back of the compound. It is made of metal, maybe during the Edo period. The head priest at that time had a visitor from Kawasaki and was handed this statue with the name of Taue Jizo.

At the temple are other statues of Jizo with special names.
清水地蔵 Kiyomizu Jizo is one of them.
- source : minsominwa.tsutaetai.jp