In the year 1592 Lord Date Masamune led his troups from 岩出山城 Iwadeyama Castle toward the capital of Kyoto. To honor the God of War 軍神 with a blood offering 血祭 at the forest 七ツ森 he begun a hunt for a sacrifice animal, but they did not catch anything. Masamune got angry and begun to climb up Mount 大森山 Omoriyama. From there he saw something black in the distance.
When he asked his retainer 片倉小十郎 Katakura Kojuro, he said it was Yakushi Nyorai.
The angry Masamune ordered a shot at it and broke the breast of the Nabe Yakushi, but at the same time blood was running out of his own nose and did not stop.
Kojuro bowed many times 三拝九拝 and then used the leaf of the bamboo grass (sasa 笹) to stop the nose bleeding.
The anger of Masamune was also calmed down now and he climbed down the mountain. He then ordered the mountain to become his special hunting ground.
- - - One version of the legend says:
The arrow came flying back at Masamune and hit his eye, causing him to loose his eyesight.

At the village Tsukinoki 槻木 there had been a long period of sunshine and drought.
The villagers gathered at the swamp 鰌沼 Dojo-Numa and decided to make an offering of a village girl to the Dragon king 竜神 as a rain ritual 雨乞い (amagoi).
The beautiful O-Yoshi およし agreed to be the victim, because she was upset with her first love, Kensaku 勘作 and felt very unhappy with her life.
On her way to the swamp, O-Yoshi she met an itinerant priest. When he heard her story he suggested that the Dragon God would not be content with her unhappy sacrifice and they would better give him a statue of Yakushi Nyorai.
When they threw the statue in the water, Yakushi got wet and then - - suddenly a strong rain began to fall and the village was saved.
They build a Yakushi Hall 薬師堂 and a small retreat for O-Yoshi who would now serve Yakushi Nyorai at the temple.

Near the fence of the assembly hall and the graveyard of the Uehara family 上原家墓地 there is a cherry tree. Below it there is a stone with the inscription of 濡れ薬師. 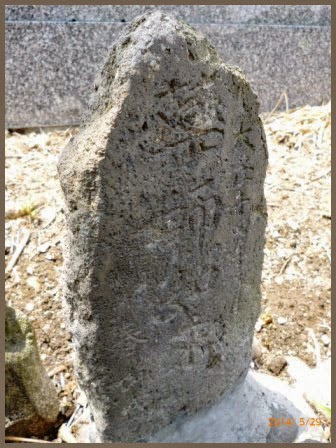 Since olden times, this Yakushi san has been known to heal diseases of the eyes and many people, who got healed by his power, come here to pray again in gratitude. They also made other small stone statues as offerings, now there are more than 30 beside the Yakushi stone.

But why is it called "Yakushi who gets wet" ?
Well, once there was a good man who built a roof over the stone to keep it dry and protect it from the rain. But then . . . the home of this good man burned down.
So people thought the stone and Yakushi with it were ment to get wet.

Once upon a time
some say it was in the year 647, at the bottom of Mount Shiodeyama 塩出山 there was a spring with salty water. An old priest 老僧 and 12 acolytes boiled the water to make salt and distributed it to the villagers.
Because of this beneficent salt, all villagers were healed from their illnesses and became healthy.
The old priest was seen as an incarnation of Yakushi Nyorai and thus the name given to him.
The place where the salt water welled up was called Shiogawara 塩河原 and the place where they boiled it down was called Shiode 塩出 - "where the salt comes from".

Once upon a time
during a wildfire most of the hamlet was burned down, but the statue of Yakushi flew high in the sky and was saved. It landed safely in a pine tree nearby. So the greatful villagers build a hall for him there and called him the "Salt Yakushi" 塩薬師.

The seated statue we see now is from the Muromachi period, covered with lacquer and then gold foil. It is seated on a lotus throne. 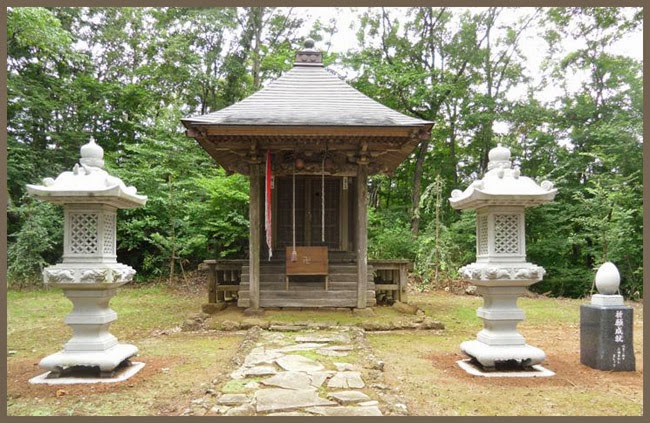 The main statue is Shaka Nyorai.

There is also a statue of Fudo Myo-O 大聖不動明王 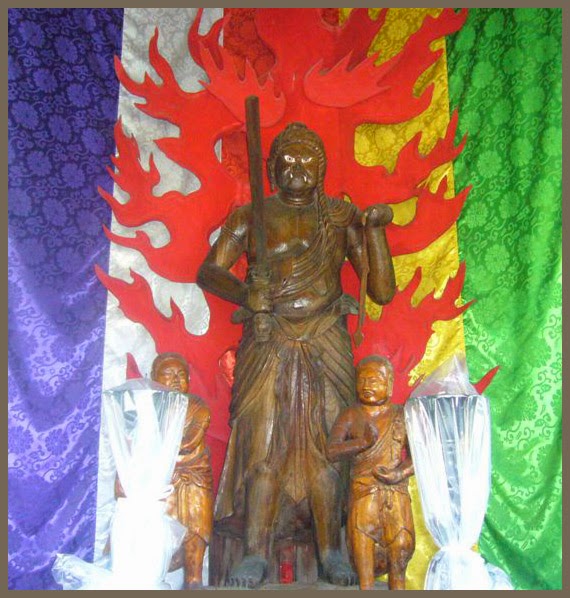 The statue is carved with one knife 一刀彫 and one among the three famous standing statues of Fudo Myo-O 不動三尊立像 in Tohoku.
- source : sekishin.info 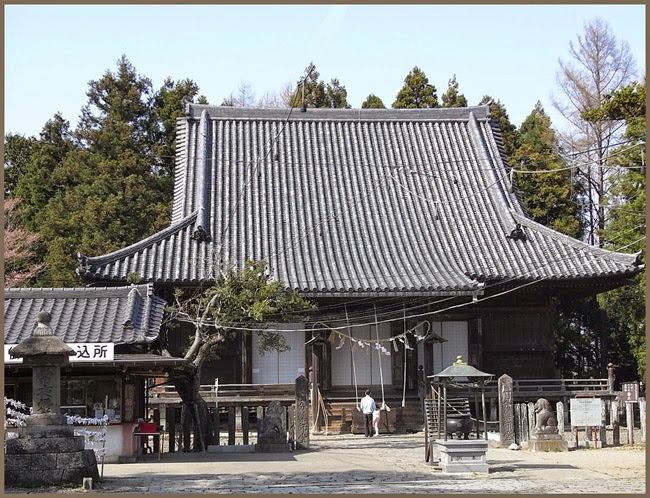 When Date Masamune was involved in a severe fight with 大崎義隆 Osaki Yoshitaka (1548 - 1603) it seemed difficult for his forces to win. Then suddenly 48 brave monk-soldiers 法師武者 appeared from nowhere and fought with the enemy, so in the end Masamune was victorious.
When he asked where these soldiers had come from, he was told
"From Kinoshita in Miyagino 宮城野" and the soldiers vanished as fast as they had appeared.

At Miyagino there was only a group of stone markers in a small stone sanctuary, dedicated to Yakushi Nyorai.
That night Masamune had a dream telling him that the soldiers had come on orders of Yakushi Nyorai to help him. 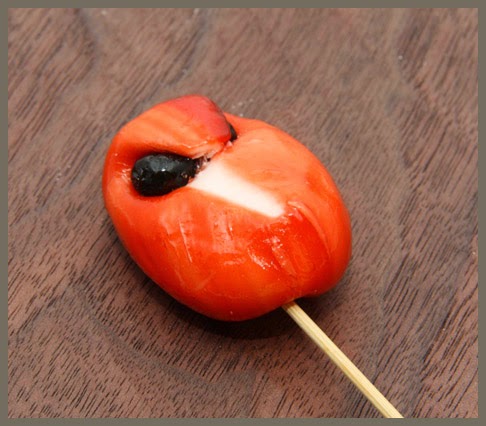 Daruma ko ame 達磨コ飴 / 達磨子飴 Daruma lollipop
A kind of candy in red color and the form of Daruma san.
On the seventh day of the first month and the third day of the third month of the old lunar year during the festival of Yakushi お薬師さん this sweet was sold. People who eat it will be healthy all year long.
After buying it you have to roll it up the stairs to the Daruma statue in the Yakushi Hall 薬師堂 and then offer it to the 神棚 Shelf of the Gods in your own home with the wish for the child or children to grow up healthy and well.
This custom was very popular until about 1910. Another type was a small horse sweet. 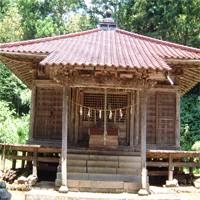 慈覚大師 Jigaku Daishi founded the temple in 861, bringing a statue of Yakushi Nyorai to be venerated here. During the construction there came a group of skilled carpenters from Hida and promised to build the hall in one night.
But the villagers imitated the crow of a rooster long before daybreak, when the carpenters had just added one ceiling beam 天井板. They were quite angry and left the village.
In front of the hall were the other beams waiting to be fixed and between them was a stone looking like a snake 蛇石. It was formed when an oxen pulling the wooden beams for the building stumbled.

The temple is also famous for its ema 絵馬 votive tablets.
In the hall is a special ema painted by 狩野法眼元信 Kano Motonobu (1476 - 1559).
The oxen on this painting did not have any reins, so he escaped from the painting and damaged the fields in front of the temple. Therefore Motonobu came back and painted some reins to keep the oxen in place on the wooden tablet.

The statue of Yakushi in the Yakushi Hall 薬師堂 is said to be carved by Jigaku Daishi himself. It is a secret statue preserved in a small sanctuary 厨子 and never shown. 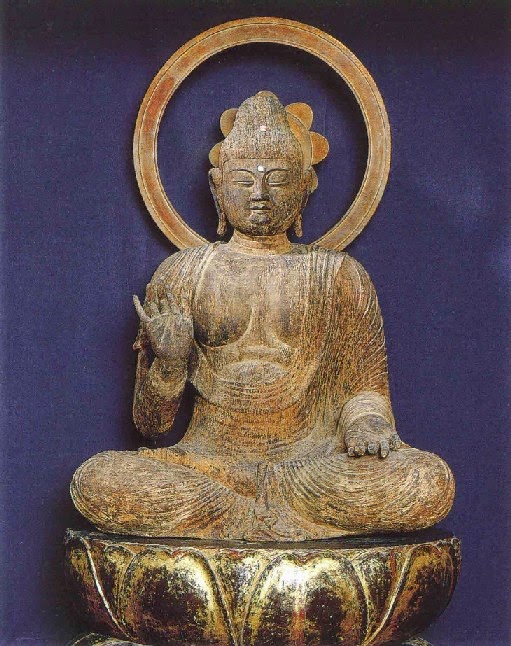 source : www.pref.miyagi.jp
The seated statue from the Heian period is 121.2 cm high and made of keyaki ケヤキ zelkova wood.
It is an important cultural property of the town 重要文化財.

Long ago in the Tenpyo period (729 - 749), when the Empress 孝謙天皇 Koken Tenno (718 - 770) was very ill and asked his diviners for advise, they told him:
"In Mutsu 陸奥 there is a very very high cedar tree 大杉 and its long branches produced a shadow until your living quarters, causing your illness."
So he ordered one of his ministers, 某（なにがし） the Dainagon Nanigashi, to have the tree cut down.
The minister found a huge cedar tree at the village of Tsukidate and had it cut down. From the cutting surface blood spilled on the ground. But on the next morning all was healed and the tree was standing there as before.
However many times they cut it down, the same thing happened. Then a diviner told them to prepare a rope of the reeds in a field North-East to the cedar tree and cover the cutting wound with it.
The splinters from cutting flew in all directions and were soon gone.
Finally the illness of the Empress was healed.
So he ordered to have a temple build over the stump of the cedar tree. Later Jigaku Daishi 慈覚大師 passed here and had a statue of Yakushi Nyorai placed on the altar. 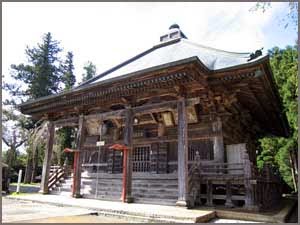 The temple became quite famous and had more than 48 sub-temples  in its compound.
But during the Middle Ages it declined through fire and fighting.
In 1591 it was re-built on orders of Date Masamune.
In the compound is the new hall 薬師瑠璃殿, / 薬師堂 - Ruridono 瑠璃殿
where the statue is now called
「お薬師様」O-Yakushi sama, 「杉薬師様」Sugi Yakushi Sama.

The festival is based on another legend of Kurihara town, the
しづはた姫物語 Shizuhata Hime Monogatari.
When the princess of the Fujiwara clan (Shizuhata, later 北の方 Kita no Kata) was on her way to Hiraizumi, she became ill on the way and prayed at the Cedar Tree Yakushi temple. She got healed on the spot and later, when she was with the Fujiwara clan, she had her retainers come to pray at this temple in a long parade.

The region of present-day Kurihara was part of the ancient Mutsu Province 陸奥の国, and has been settled since the Jomon period by the Emishi.
During the later portion of the Heian period, the area was ruled by the Northern Fujiwara. During the Sengoku period, the area was contested by various samurai clans before it came under the control of the Date clan of Sendai.

Just when I had finished this article, with the words Miyagino and Wakabayashi still fresh in my mind, there was an article in the Japan Times
about the reconstruction efforts after the earthquake of March 11, 2011 -

- quote -
Innovation helps Tohoku’s tsunami-hit farmers bounce back
by Megan Rowling - Japan Times -
SENDAI –
Even before a tsunami swamped fields east of Sendai in March 2011, Chikako Sasaki and her husband, a rice farmer, had dreamed of starting a business selling food made from their own produce. . . .
. . . The company in Wakabayashi Ward also has a processing facility nearby, and is planning to expand its other activity of making boxed lunches for convenience stores and public events.
. . . The company, which began operating almost two years ago in Miyagino Ward with capital from five young local farmers and disaster relief grants and loans, employs around 40 people and is branching out into organic vegetables too.
. . . Drainage pumping stations were quickly restored after the disaster with new ones now being built to double capacity needed to cope with the 50 cm of ground subsidence caused by the quake.
To cover the extra cost of the new pumping stations, the Sendai’s city government has installed solar panels near its agriculture and horticulture center in Wakabayashi.
With a capacity to generate power for 150 households, the solar plant has recently begun producing electricity, which is sold to the grid.
- source : Japan Times April 01, 2015

Just after writing this entry, there is this good news about Sendai, Miyagino and Wakabayashi . . .

SENDAI –
Even before a tsunami swamped fields east of Sendai in March 2011, Chikako Sasaki and her husband, a rice farmer, had dreamed of starting a business selling food made from their own produce.