- quote
Gyōgi built the temple on the order of Emperor Shōmu. While the temple was being built, a white heron (shirasagi) landed on what is now called Shirasagi Bridge and this was considered to be a very auspicious sign.

The honzon, slightly smaller than two inches, was carved on 'jambuna' gold (enbudagon) by Gyōgi and installed here to pray for an easy delivery for Empress Kōmyō, Emperor Shōmu's wife. Kōbō Daishi carved a six-foot statue of Jizō that now enshrines the tiny statue carved by Gyōgi.

Legend states that, in the 19th century, a woman named Okyō came to Shikoku with her lover to escape the authorities. They had killed the man she had been a mistress to before she had met the man she was now with. To escape the authorities, they disguised themselves as henro and were following the other henro around the pilgrimage. When they reached the hondō of Temple 19, as she tried to ring the bell to start her prayers, Okyō's hair suddenly stood on end and got entangled in the bell's rope. After struggling, she got herself free but all of her hair, and part of her scalp, remained entangled in the rope, leaving her with the monastic tonsure. Taking this as a sign from Kobō Daishi, the couple both became devout Buddhists, she becoming a nun and he a monk. She lived the rest of her life in a small chapel owned by the temple and devoted her life to prayers while he became a temple laborer. Okyō's hair and scalp can still be seen at the temple in a little glass-encased shrine just off the walkway.

Like so many of the other temples, this one was destroyed by Chōsokabe and then later restored. The temple burned down again and was rebuilt in 1977.

In the compound is a small statue with a very shiny red face. It is a statue of Binzuru, one of the first sixteen disciples of the Buddha. He was a physician and came from a family of distinguished physicians. But, he loved to drink and this often caused problems. One day, a rich man came to the Buddha and asked him to overcome an evil spirit that had been afflicting his house. The Buddha couldn't go, so he sent Binzuru in his place, but admonished him to be careful and not to drink. Binzuru went and did, in fact find an evil spirit. He confronted it and, by proclaiming the Buddha's teachings, overcame it.

In thanks, the rich man threw a banquet and Binzuru, after holding out for a long time, broke down and had a drink in celebration. Not being able to stop after just one, though, he got drunk and lost his power over the evil spirit. The spirit returned and soon the house was suffering again. The Buddha became mad and kicked Binzuru out of his community but said nothing when he saw that Binzuru was still following him around and listening from outside.

When the Buddha died, he called Binzuru to his side and told him that he forgave him, but that Binzuru would never be allowed to enter Nirvana himself. He would always have to remain in this world to minister to the people. That is why you see his red-faced statue at many temples. People rub the statue and then place the hand they used over the part of their body that hurts.

As this was once the barrier temple for Awa Province, while here, henro should make a spiritual self-evaluation. Has your pilgrimage been worthy so far? Have you been living up to the obligations placed on you as a henro? Have you maintained your vows? If not, you should return to Temple 1 and start over again. Some stories say that those who are unworthy have actually been unable to enter the temple grounds. 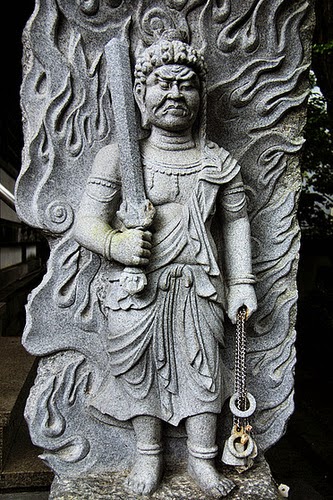 Fudo is holding a chain rather than a rope.