- Kabuki -
A famous temple in Ôsaka. It was built in 1752 to honour the soldiers who were killed during the 1615 Summer campaign. Its real name was Kyônyoan but it was nicknamed Dondoro Taishi because of the daimyô Doi Toshitsura 土井利位 (1789~1848), who was in service in Ôsaka Castle for the Shogunate from 1834 to 1837 and lived near the Kyônyoan. He assiduously prayed there and contributed to the fame of this temple.
It was a custom to call it "Doi-dono Taishi", which became Dondoro Taishi in popular speech.

"Keisei Awa no Naruto" was a 10-act drama. The 8th act, divided into two scenes, "Dondoro Taishi no Monzen" (the Temple Town (monzen) near Dondoro Taishi) and "Jûrôbei Uchi" (at Jûrôbei's Home), is the only one, which is still part of both the Kabuki and Bunraku repertoires. The drama nicknamed "Dondoro" is the first scene of this 8th act.

- Summary
Jûrobei, a samurai, has taken upon himself the task of finding his master's lost sword. He moves to Ôsaka with his wife Oyumi, leaving their infant daughter in the care of her grandmother for her own safety. He joins a band of thieves to allow himself access to places where the sword might be found and has been searching for 10 years to no avail.

In the scene immediately preceding the one performed, a messenger visits Oyumi who is alone at home. He brings a letter from one of Jûrobei's cohorts: their crimes have been discovered and some members of the group have been caught. Jûrobei and his wife should flee as soon as possible to escape capture.

Shortly thereafter, Oyumi hears the songs of a Buddhist pilgrim and the ringing of a bell. A young girl on a pilgrimage has called at the house. Oyumi gives her an offering of rice and invites her in when she learns that the girl is from her own home province. The girl tells of how she is on a walking pilgrimage from distant Awa in search of her parents from whom she was separated when she was a small child. Suspicious, Oyumi asks the names of the girl's parents. Whereupon, the girl tells her they are "Jûrobei" and "Oyumi".

Shocked to learn that the girl standing before her is her own daughter Otsuru, whom she had left behind years earlier, Oyumi is torn; she wants to take her beloved daughter in her arms, but if she reveals to the Otsuru that she is her mother the girl will surely be dragged into the sordid and potentially fatal affairs of her family. Oyumi fears for her daughter's life should she rejoin her parents, who may themselves be doomed. Clutching the letter she had earlier received, Oyumi vacillates but finally decides to compose herself and keep her identity secret. 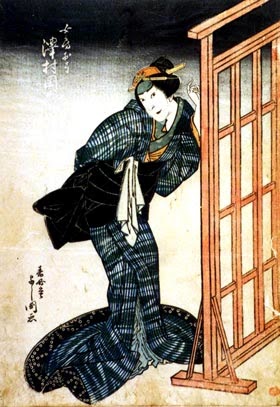 The purity of Otsuru's devotion to the search for her parents pierces Oyumi's heart. She waivers several times but finally decides to tell the girl that she should go back to her grandmother and await her parents' return.

Touched by Oyumi's motherly compassion, the girl pleads that Oyumi might allow her to stay. Oyumi is overwhelmed by sadness but realizes that she must send Otsuru away for her own safety. She prepares some traveling money and gives it to the girl, but Otsuru will not accept it: she has enough for the road. Oyumi brushes the dust from Otsuru's kimono, then takes a hairpin and fixes Otsuru's hair before the girl turns to leave.

Unable to part without seeing her one last time Oyumi calls her daughter back to her and they embrace. Otsuru grasps the end of a strip of cloth that Oyumi is holding and tries to pull her mother toward her in a highly-stylized scene that is one of the most famous in the puppet theatre. Oyumi eventually pushes Otsuru out of the house then sits stifling her sobs beside the closed door as Otsuru beats on it from the other side.

Oyumi listens as Otsuru's song fades in the distance. Overcome with grief that she may never see her daughter again, Oyumi rushes out of the house to call her back. But the girl is already gone. Anguished, Oyumi is reduced to tears, but she resolves to go after her daughter. The scene ends with Oyumi standing before her house preparing to leave.
- source : www.kabuki21.com

Meiji Era Kabuki: Three Shintomiza Tsuji Banzuke
The performance date places the performance this tsuji banzuke advertised on 8th February 1912, the last year, 46, of the Meiji era, which ended that same year with the death of Emperor Meiji on 30th July 1912, which had been a time of major changes in Japanese society. 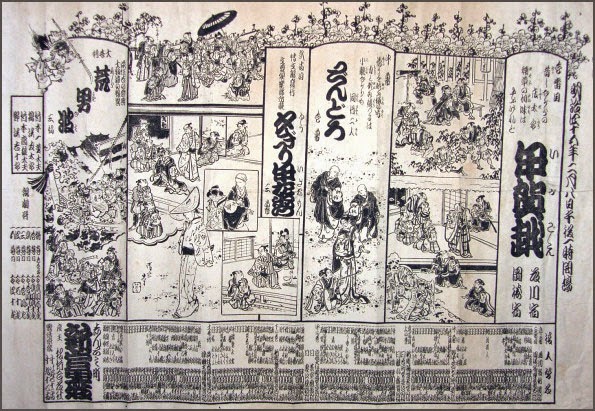 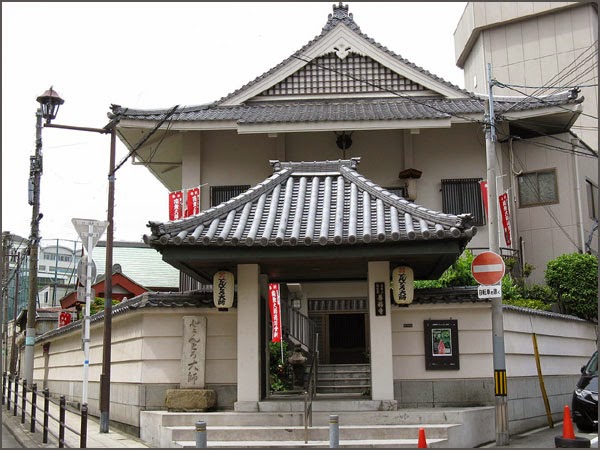 The main statue is of Kobo Daishi, with Aizen Myo-O 愛染明王 and Fudo Myo-O 不動明王 at his side (newly made after a fire during WWII destroyed the compound).
There are also statues of Nyoirin Kannon 如意輪観世音菩薩 and Yakushi Nyorai 薬師如来.
鏡如庵大師堂 Kyonyo-An, Hall for Kobo Daishi
and
Doi Dono no Daishi 「土井殿の大師」（どいどののだいし）


The temple has been founded by Shokoku Taishi 聖徳太子 around 778. People came here to pray for favorable weather, especially protection from long rain or for rain during a draught. 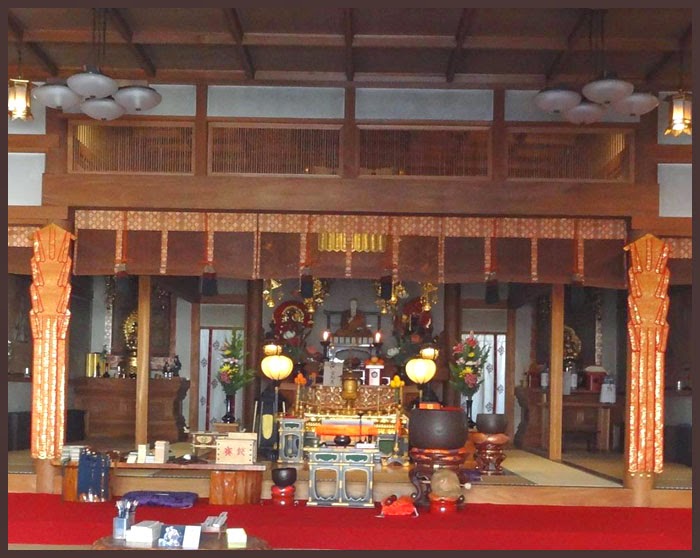 Daishi meguri 大師巡り, visiting a temple in honor of Kobo Daishi on the 21 of each month, became quite popular in the region after the war.
In Osaka, this was
Naniwa Daishi meguri 浪華大師巡り. 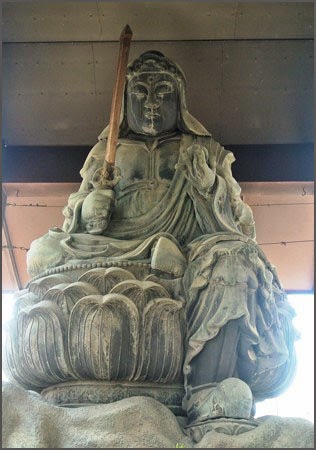 In the compound is a bronze statue of
Shogun Jizoo 勝軍地蔵尊
in memory of the War with Russia from 1907. 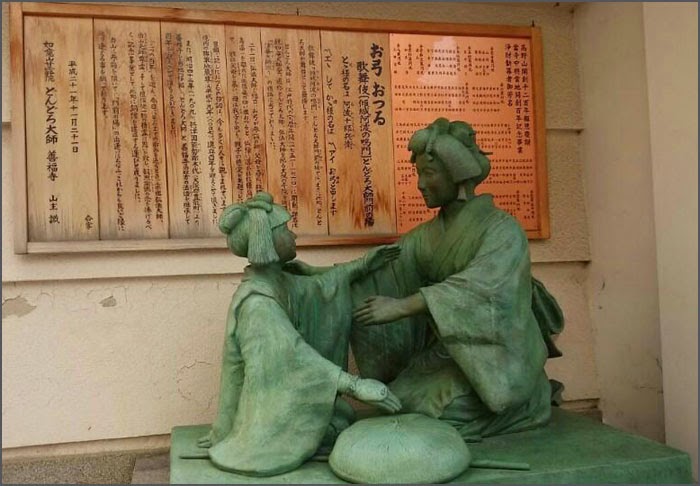 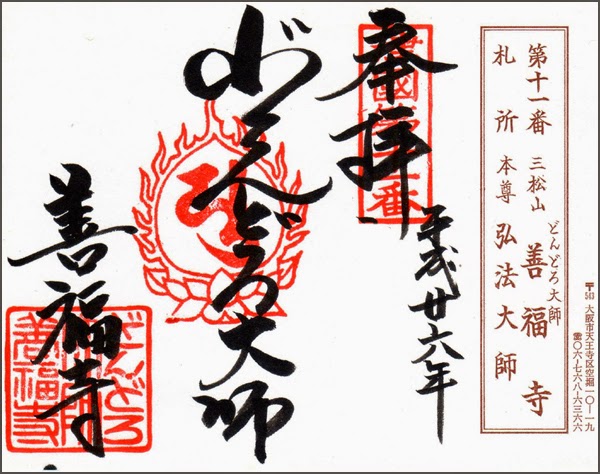