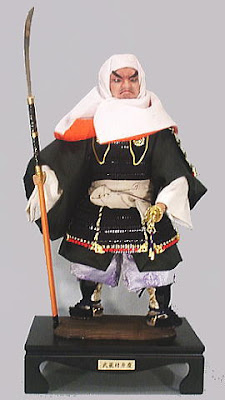 One of the most famous tsuwamono (Hercules) is maybe super-strong Musashibo Benkei 武蔵坊弁慶, the monk-soldier who accompanied Yoshitsune during his whole life.

The prominence of the sōhei rose in parallel with the ascendancy of the Tendai school's influence between the 10th and 17th centuries. The warriors protected land and intimidated rival schools of Buddhism, becoming a significant factor in the spread of Buddhism and the development of different schools during the Kamakura period.

They were similar to the mountain ascetic yamabushi warrior monks, but unlike the solitary yamabushi, sōhei generally organized into large armies or mobs. A famous monastery is the Enryaku-ji on Mount Hiei, just outside Kyoto.

The sōhei shared many similarities with the Western lay brothers, members of a monastic order who might not have been ordained. Much like warrior monks of Germany , or other religious orders, such as those involved in the Crusades, sōhei did not operate as individuals, or even as members of small, individual temples, but rather as warriors in a large extended brotherhood or monastic order. The 'home temple' of a sōhei monastic order might have had several, if not tens or a hundred, smaller monasteries, training halls, and subordinate temples. 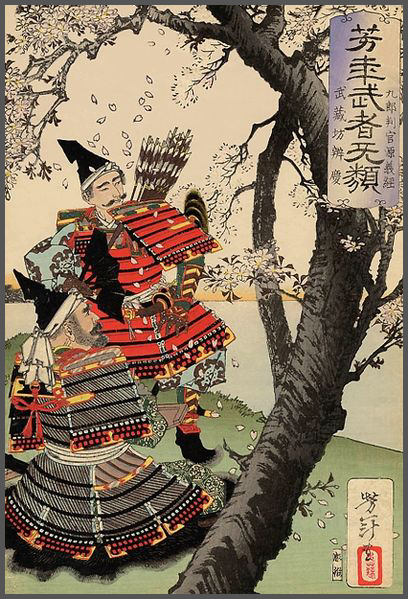 Weapons and dress
Sōhei were quite varied in their armament. The naginata is the weapon most often associated with them, though in legend as well as history many warrior monks are known to have been proficient with everything from bow and arrow to tantō and wakizashi (dagger and shortsword). Many fought on horseback, and many with the Ō-yoroi armor of the samurai.

Warrior monks, like most other Buddhist monks of related sects, wore a series of kimono-like robes over one another, usually white underneath, and tan or saffron yellow on top; this style has changed very little since the introduction of Buddhism to Japan in the 7th century. Footwear traditionally consisted of tabi socks and geta (wooden clogs), or waraji straw sandals. Warrior monks would often fold and tie the white headcowl to cover more of their head, or would substitute a hachimaki headband. Finally, many warrior monks would wear some form of samurai armor.

The sōhei employed a variety of weapons. The obi, or belt, of the kimono would often be supplemented with a heavier sash, so a sword could be slung from it. The tachi style of sword was probably the most common, though many monks may have carried tantō as well. Many monks were also accomplished archers, and used bamboo-and-rattan bows, called daikyū, with bamboo arrows. The most traditional weapon of the monk, however, was the naginata, a weapon much like the European glaive or halberd. The sōhei were also trained to use the heavy kanabō, which was a large staff or club forged of solid iron. Although deadly, this weapon was generally used to defeat an opponent without bloodshed.

The Ikkō-ikki monks of the 16th century, due largely to their origins as countryside mobs, were far more varied in their armor and armament. Many wore the more traditional monk robes, with varying degrees and types of armor. Many wore various sorts of helmets, while many others opted for the straw hat and cloak of a peasant. Naginata remained very common, along with a variety of swords and daggers, and a limited number of arquebuses (with the Saika Ikki being a notable exception, as they are mainly composed of musketeers and gunsmiths as per Saika Magoichi's standard of having an all-musketeer army). Finally, while not truly armor nor armament, a very common item wielded by the mobs of Ikkō-ikki monk warriors was a banner with a Buddhist slogan written upon it. One of the more common slogans was the chant 'Hail to the Amida Buddha!' (Namu Amida Butsu).
© More in the WIKIPEDIA ! 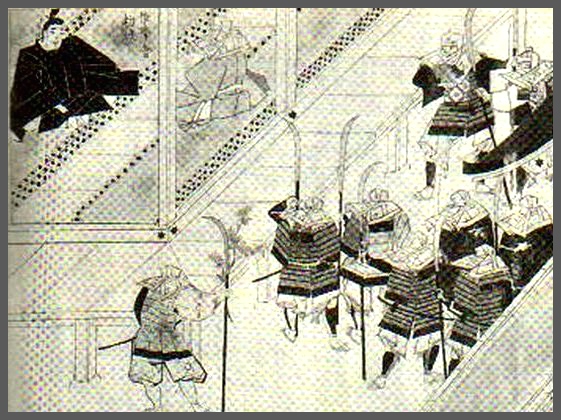 
- quote -
sohei - warrior monks
The famous warrior monks, or Sohei, of Mt. Hiei came about, it would seem, in an unexpected way.
From its earliest times, the 延暦寺 Enryakuji was held to be off limits to both women and law enforcement bodies. The latter prohibition attracted such a large criminal element to Mt. Hiei that Kakûjin (1012-81), the 35th abbot of the Enryakuji, called for his followers to form an army and drive away the undesirables. In fact, many of the men who took up arms may well have been those very same unwelcome fugitives they were intended to fight. From this time forward, Mt. Hiei would maintain a martial arm, one that it rarely hesitated to use. One frequent victim of the Enryakuji's heavy-handed tactics was none other then the emperor himself. As emperor Shirakawa is alleged to have said, "There are three things that even I cannot control: the waters of the Kamo river, the roll of the dice, and the monks of the mountain."
When the monks of Mt. Hiei found themselves at odds with court over some affair (perhaps a question of land rights or taxation), they would gather and march down at to the gates of Kyoto, bearing on their shoulders the sacred palanquin (mikoshi) of the Shinto deity Sanno. So revered was this artifact that no one dared block its passage and much more often then not the emperor would give in to the monk's demands. The warrior monks of the Enryakuji would continue to play an important role in the Kyoto area for hundreds of years, until the advent of Oda Nobunaga.
While evidently not the first monastic complex to take on a military aspect, the Enryakuji's reputation was great indeed.
. The Heian Period - Court and Clan - F.W.Seal .

this cold moon -
after the monk-soldiers left
the war meeting 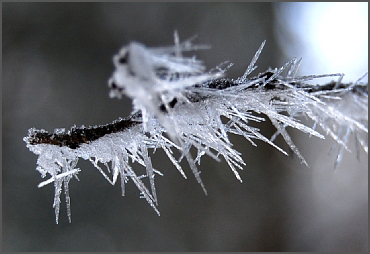 the descendants
of monk-soldiers are so handsome -
cutting bamboo ritual


- On June 20 at temple Kuramadera, Kyoto 鞍馬寺.
Four bamboo poles in front of the main temple hall are cut by two groups of people clad in formal robes, the east and west group. They use special woodman's hatchets (山刀) and fight for speed. The group which finishes first will be used to divine the harvest of the coming autumn.

in the valley
that nurtured dreams of monk-soliers
now is snow . . .

The temple Daisen-Ji 大山寺 at Mount Daisen in Tottori was famous for its soldier-monks.
It gets a heavy load of snow every winter.

Email ThisBlogThis!Share to TwitterShare to FacebookShare to Pinterest
Labels: - - - SSS - - -