Naraka Hell
Diyu 地狱 (Jap. jigoku) (Sanskrit: नरक "Naraka")
is the realm of the dead or "hell" in Chinese mythology.
It is loosely based on a combination of the Buddhist concept of Naraka, traditional Chinese beliefs about the afterlife and a variety of popular expansions and re-interpretations of these two traditions. 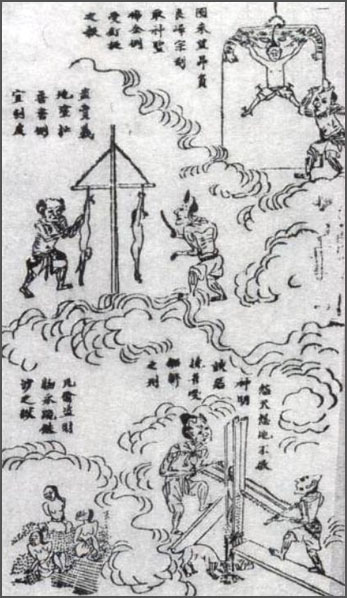 Diyu is typically depicted as an underground maze with various levels and chambers, to which souls are taken after death to atone for the sins they committed when they were alive. The exact number of levels in Diyu and their associated deities differ between Buddhist and Taoist interpretations. Some speak of three to four "courts"; others mention "Ten Courts of Hell", each of which is ruled by a judge (collectively known as the Ten Yama Kings); other Chinese legends speak of the "Eighteen Levels of Hell". Each court deals with a different aspect of atonement and different punishments; most legends claim that sinners are subjected to gruesome tortures until their "deaths", after which they are restored to their original state for the torture to be repeated again.

Conceptions of Diyu
According to ideas from Taoism, Buddhism and traditional Chinese folk religion, Diyu is a purgatory that serves to punish and renew spirits in preparation for reincarnation into their next life. Many deities, whose names and purposes are the subject of conflicting accounts, are associated with Diyu.

Ten Courts of Hell
The concept of the "Ten Courts of Hell" began after Chinese folk religions were influenced by Buddhism. In Chinese mythology, the Jade Emperor put King Yama in charge of overseeing the affairs of Diyu. There are 12,800 hells located under the earth - eight dark hells, eight cold hells and 84,000 miscellaneous hells located at the edge of the universe. All will go to Diyu after death but the period of time one spends in Diyu depends on the severity of the sins he or she has committed, and after receiving due punishment, he or she will eventually be sent for reincarnation. In the meantime, souls will pass from stage to stage at the decision of Yama. Yama also reduced the number of hells to ten. He later divided Diyu into ten courts, each overseen by a "Yama King", while he remained as the sovereign ruler of Diyu.

Alternate names for hell
Among the more common Chinese names for the Underworld are:


Other terminology related to hell includes:

Naihe Qiao (simplified Chinese: 奈何桥; traditional Chinese: 奈何橋; pinyin: Nàihé Qiáo), "Bridge of Helplessness", a bridge every soul has to cross before entering the Underworld, just like the River Styx in Greek mythology.

Wang Xiang Tai (simplified Chinese: 望乡台; traditional Chinese: 望鄉臺; pinyin: Wàng Xiāng Tái), "Home-Viewing Pavilion", a pavilion every soul passes by on his / her journey to the Underworld. From there, they can see their families and loved ones in the living world.